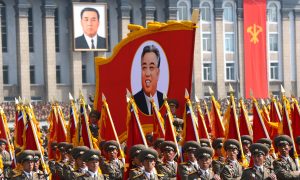 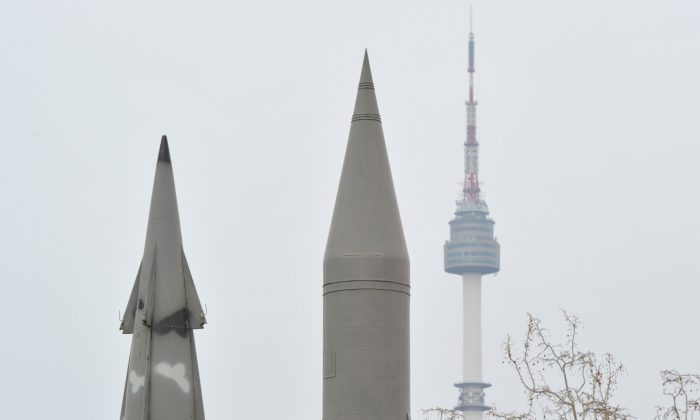 The replica of North Korea's Scud missile (C) and a decommissioned South Korean missile stand side by side at a war museum against the background of Mount Namsan in Seoul on April 10, 2013. (Kim Jae-Hwan/AFP/Getty Images)
Asia & Pacific

On March 26, North Korea put its strategic rocket forces and artillery units on the highest level of readiness for combat.

“As long as this order remains in place, there are possibilities that the North could fire off a missile,” a South Korean military source told Yonhap on condition of anonymity.

In the days leading up to April 15, the birth date of North Korea’s late founding leader Kim Il Sung, North Korea had several missiles at the ready, including short-range and medium-range missiles. Last year, on what would have been Il Sung’s 100th birthday, North Korea unsuccessfully launched a rocket.

South Korea and the United States had raised their surveillance alert level, but the date passed without incident.

Steven Pifer, director of the Brookings Arms Control Initiative, gives a summary of North Korea’s missile artillery in an article on the Brookings website: “North Korea is estimated to have 550-600 Hwasong-5 and -6 missiles, variants of the venerable Soviet Scud, which was first flown in the 1950s and exported around the world.  The Hwasong missiles have ranges of 300–500 kilometers [185–310 miles], giving them the capability to target South Korea.”

North Korea is estimated to have about 200 Nodong missiles deployed, according to Pifer. The Nodongs are enhanced scud missiles with a range of 600–800 miles. They could reach Japan and South Korea.

Its Musudan medium-range ballistic missiles can reach about 2,000 miles (3,200 kilometers), but have not been flight tested. North Korea’s Taepodong-1 has a range of 2,200 kilometers and has only flown once, in 1998, and failed its third stage.

North Korea has showcased a the KN-08 missile, supposedly an intercontinental ballistic missile (ICBM). The KN-08 has never flown, and may even be a fake, says Pifer.

United Nations (U.N.) Secretary General Ban Ki Moon expressed his concerns to reporters during a press session in Rome, Italy, on April 9 transcribed on the U.N. website: “If any small incident [occurs,] caused by miscalculation or misjudgement, it may create [an] uncontrollable situation.”

In a press briefing aboard Air Force One transcribed on the White House website, Deputy Press Secretary Josh Earnest said the United States is still open to negotiations with North Korea, but only if it definitively ends its nuclear program.

“Well, we’re open to credible negotiations with the North Koreans, but we also need to see some clear evidence that the North Koreans themselves are willing to live up to their international obligations, are willing to demonstrate their commitment to ending the nuclear program, something they’ve promise in the past,” Earnest said. “We haven’t seen that thus far.”