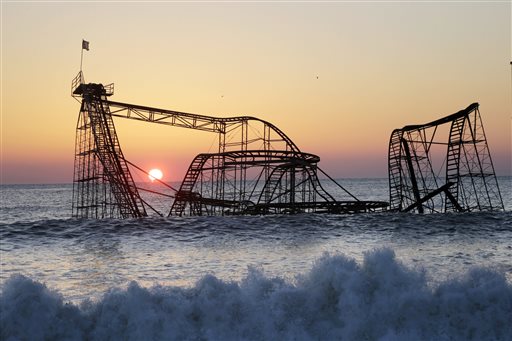 In a Feb. 25, 2013 file photo, the sun rises in Seaside Heights, N.J., behind the Jet Star Roller Coaster which has been sitting in the ocean after part of the Funtown Pier was destroyed during Superstorm Sandy. Work is expected to start Tuesday afternoon, May 14, 2013 to remove the Jet Star coaster from the surf in Seaside Heights. (AP Photo/Mel Evans, File)
US

N.J. Ocean Roller Coaster: A roller coaster that has sat in the ocean since Hurricane Sandy struck New Jersey and New York on Oct. 30, 2012 will be dismantled on May 14, hours after Prince Harry of Britain visits Seaside Heights.

The JetStar roller coaster will be removed after 2 p.m., with representatives of Casino Pier, where the roller coaster is, to explain the removal operation, according to the New Jersey Star-Ledger.

“For us, it would be progress to have it out,” said Toby Wolf, spokeswoman for the Casino Pier, where the coaster was situated above the Atlantic Ocean. “We want to be able to move forward and move on and get everything going toward a recovery. That’s been our goal since the beginning.”

Work crews will work around the clock to remove the coaster. Work is expected to take several days. Officials want it done before Memorial Day weekend.

The job includes removing almost 100,000 square feet of the pier that either plunged in the ocean or was badly damaged.

Prince Harry, meanwhile, as part of his tour of the United States, will visit Hurricane Sandy victims in New Jersey, including Seaside Heights.