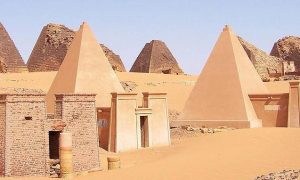 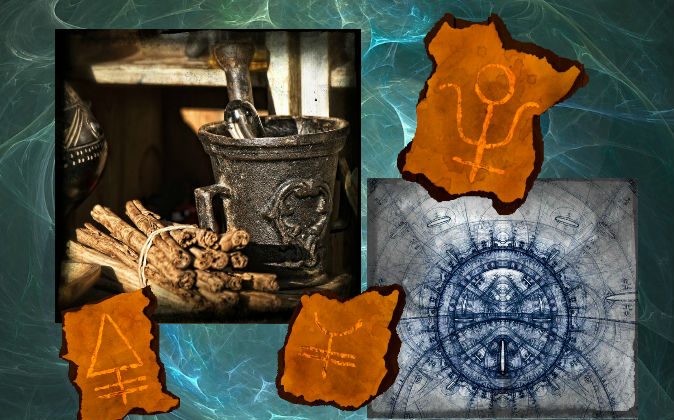 Concept images of alchemy tools and alchemical symbols. (All images via Shutterstock*)
Beyond Science

A similar quest evidently began in ancient India, China, and Egypt thousands of years ago. All of these cultures sought to turn lead or other substances into gold and to attain immortality through learning to manipulate and purify matter as such.

Though the goals and procedures are similar, the alchemical practices in these societies seem, nonetheless, to have sprung up independently.

“In the second century A.D., Egyptian craftsmen in Alexandria were the first alchemists who tried desperately to convert metal into gold. Almost simultaneously and independently, the Taoist monks (not pure alchemists but religious magicians) believed gold to be a miraculous medicine and they, too, sought to produce it, not for wealth but for perpetual youth and immortality,” wrote acupuncturist Joseph P. Hou, Ph.D., in his book “Healthy Longevity Techniques.”

The late Dr. Allen G. Debus (1926–2009) also wrote of the nearly simultaneous and independent emergence of alchemy in different cultures. Debus received a Ph.D. at Harvard University and became well-known as a science historian. He wrote in his book “Alchemy and Early Modern Chemistry” that alchemy emerged independently not only in Egypt and China, but also in India. Though alchemy in China and India showed some cross-influences at a later period, Debus believed the two began independently.

An outline of an alchemy course at the University of Hawai’i defines the ancient practice: “Alchemy is a cosmic art by which parts of that cosmos—the mineral and animal parts—can be liberated from their temporal existence and attain states of perfection: gold in the case of minerals, and for humans, longevity, immortality, and redemption. Such transformations can be brought about on one hand by the use of a material substance such as the ‘philosopher’s stone’ or elixir, or, on the other hand by revelatory knowledge or psychological enlightenment.”

Alchemy may have emerged in various cultures because of its bearing on common or universal theories, Debus wrote. These theories relate to, for example, the concept of immortality and the early association of gold with the state of perfection. Debus outlined some of the similarities and differences across cultures.

The Egyptian alchemy wasn’t as closely associated with religion as the Chinese and Indian were. In Egypt, it was of a more practical nature than of a mystical nature.

Greeks also held contraries to be important. They worked with contraries such as hot-cold, moist-dry, earth-air, and fire-water.

As with the discovery of gunpowder (long used for firecrackers before purposed for weaponry), alchemy’s observations of chemical reactions contributed largely to the foundation of modern chemistry.

The University of Hawai’i gives examples of the riddles in which alchemists began to write: “The grey wolf devours the King, after which it is buried on a pyre, consuming the wolf and restoring the King to life.” This translates as an “extraction of gold from alloys by skimming off lesser metal sulfides and roasting of the gold antimony alloy until antimony evaporates and pure gold remains.” The university’s paper notes that the cryptic alchemical message is no less mystifying than modern chemistry jargon; for example, “dehydrohalogenate vicinal dihalides with amide ion to provide alkynes.”

Modern scientists, such as Sir Isaac Newton, Robert Boyle, and John Locke, were alchemists. Bill Newman, a historian at Indiana University, studied Newton’s secret coded recipes. He told NOVA: “If you look at the experimental notebooks that he kept for about 30 years, it really is impossible to avoid the conclusion that he was trying to produce the philosophers’ stone.”

*Images of abstract alchemical symbols, a mortar in an old laboratory, golden magical signs, and a fractal design background via Shutterstock.