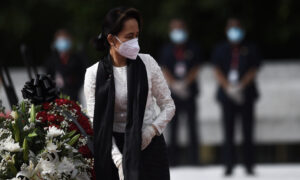 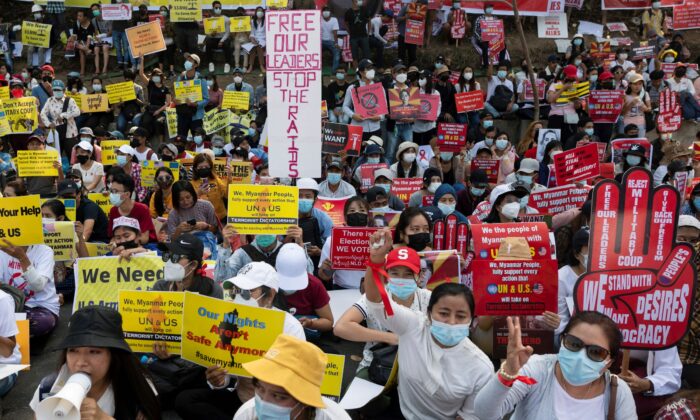 Demonstrators holding placards sit during a protest against the military coup outside the U.S. embassy in Yangon, Burma on Feb. 16, 2021. (Stringer/Reuters)
Asia & Pacific

The military junta of  Burma (also known as Myanmar) promised on Tuesday that it would hold an election and hand over power as police filed an additional charge against toppled former leader Aung San Suu Kyi.

It also defended its Feb. 1 seizure of power, denying it was a coup even as protesters took to the streets again in support of Suu Kyi and other arrested leaders and China dismissed social media rumors that it had helped with the military’s action.

“Our objective is to hold an election and hand power to the winning party,” Brigadier General Zaw Min Tun, spokesman for the ruling council, told the junta’s first news conference since overthrowing Suu Kyi’s government.

The military has not given a date for a new election but has imposed a state of emergency for one year. Zaw Min Tun said the military would not hold power for long.

“We guarantee … that the election will be held,” he told the nearly two-hour news conference, which the military broadcast from the capital, Naypyitaw, live over Facebook, a platform it has banned.

Asked about the detention of Nobel Peace Prize winner Suu Kyi and the president, Zaw Min Tun dismissed the suggestion they were in detention, saying they were in their homes for their security while the law took its course.

She faces charges of illegally importing six walkie-talkie radios and is being held on remand until Wednesday. Her lawyer said on Tuesday police had filed a second charge of violating a Natural Disaster Management Law.

The army spokesman, Zaw Min Tun, said Burma’s foreign policy would not change, the country remained open for business and deals would be upheld.

The military will be hoping its reassurances will dampen the campaign of daily opposition to its rule and to the removal of Suu Kyi and her government.

As well as the demonstrations in towns and cities across the ethnically diverse country, a civil disobedience movement has brought strikes that are crippling many functions of government.

The unrest has revived memories of bloody outbreaks of opposition to almost half a century of direct army rule that ended in 2011 when the military began a process of withdrawing from politics.

Police have opened fire several times, mostly with rubber bullets, to disperse protesters. A protester who was shot in the head in Naypyitaw last week is not expected to survive.

Six people were wounded in the central town of Maungmya on Tuesday when police fired rubber bullets to break up a protest over an arrested teacher, a witness said. An army statement said protesters had thrown stones at police, injuring some officers.

Zaw Min Tun said a policeman had died of injuries sustained during a protest in Mandalay on Monday.

He said the protesters were starting violence while the campaign of civil disobedience amounted to the illegal intimidation of civil servants.

“We will wait patiently. After that, we will take action according to the law,” Zaw Min Tun said.

The army has given itself extensive search and detention powers and has made penal code amendments aimed at stifling dissent with tough prison terms.

Protesters milled onto a sun-baked stretch of railway track earlier in the day waving placards in support of the disobedience movement and blocking trains between the commercial capital Yangon and the southern city of Mawlamyine.

“Release our leaders immediately,” and “People’s power, give it back,” the crowd chanted in live images broadcast by media.

Crowds gathered in Yangon, including at the central bank where protesters called for staff to join the civil disobedience movement. Buddhist monks also rallied against the coup in Yangon while hundreds marched through the west coast town of Thanked.

The army took power alleging that its complaints of fraud in a Nov. 8 general election, in which Suu Kyi’s National League for Democracy party had won a landslide, were being ignored.

The electoral commission had dismissed the army’s complaints.

The coup has prompted an angry response from Western countries and the United States has slapped some sanctions on the generals.

But China has taken a softer approach, arguing stability should be the priority in its neighbor, where it has close contacts with the military. China did, however, join other UN Security Council members in calling for the release of Suu Kyi.

On Tuesday, Chinese Ambassador Chen Hai said the situation was “absolutely not what China wants to see” and dismissed rumors of Chinese involvement in the coup as “completely nonsense.”

Chen, in an interview with media posted on his embassy’s Facebook page, said Beijing maintained friendly relations with both the army and the former government and had not been “informed in advance of the political change.”