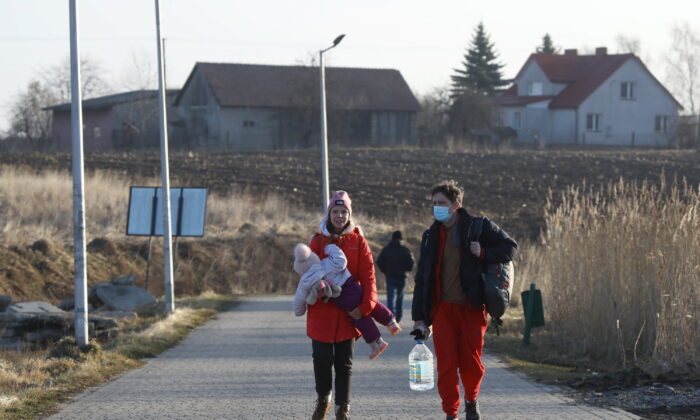 People stand at the border crossing between Poland and Ukraine, after Russian President Vladimir Putin authorized a military operation in eastern Ukraine, in Medyka, Poland, on Feb. 24, 2022. (Kacper Pempel/Reuters)
Europe

‘My Mother Heard Explosions and Yelled That the War Is Coming’: Ukrainians React to Russian Invasion

Ukrainians have shared details about what is happening inside the country as Moscow-led military attacks have sent thousands of residents fleeing their homes.

The sounds of explosions were allegedly heard in the Ukrainian capital of Kyiv shortly after Russian President Vladimir Putin announced a “special military operation” in Ukraine early Thursday, local time.

Natalie Telesheva, a digital artist living in Kharkiv, roughly 299 miles from Kyiv, told The Epoch Times that she was woken up early on Thursday morning by her mother who heard the sound of explosions pummeling the city.

“I was sleeping and my mother raced into my bedroom and said she had heard explosions and yelled that the war is coming and we need to leave,” Telesheva said.

The artist, 25, said that she has seen hundreds of people trying to flee the city, leading to roads being completely blocked with traffic jams.

Her own family is contemplating traveling to Poltava, a city located on the Vorskla River in central Ukraine because they feel it would be safer but again they are hesitant to leave their home.

Inside Kharkiv, locals have turned to stockpiling goods amid the invasion, leaving supermarket shelves virtually empty.

“I went out earlier today and there were so many people on the streets trying to leave, some of them were going to the underground station to shelter from air missiles,” Telesheva said. “I wanted to buy some water but people have been mass purchasing food and drink because they feared it would run out so I couldn’t get anything.”

“There is a general feeling of panic here, we are afraid,” she said, adding that she heard multiple explosions earlier today but that things have since become “much quieter” this afternoon.

Telesheva said that Russian troops had earlier taken over the ring road near Kharkiv but that the Ukrainian army has now removed them from the area.

Russian troops had also arrived near the town of Shchastya in Ukraine’s region of Luhansk after Putin’s announcement earlier this week that the country will recognize the independent sovereignty of the Donetsk and Luhansk regions in eastern Ukraine.

But Telesheva said that this area is now “safe.”

The Land Forces of the Armed Forces of Ukraine posted a statement on social media on Thursday morning local time which reads, “Operational information from the east of Ukraine. Two tanks and several trucks of the Russian Federation were destroyed in the area of Shchastya. Follow the updates.”

In a second update, officials said, “The city of happiness is under control.” Shchastya means happiness in Ukrainian.

Iuliia Mendel, the former press secretary for Ukrainian president Volodymyr Zelensky’s administration said on Twitter on Thursday that, “The Ukrainian Armed Forces recaptured Zmiinyy Island (near Odesa, South)” and that “Mariupol and Shchastia in Donbas are also under Ukrainian control.”

Telesheva said Ukrainian forces have also successfully removed Russian troops from Chernihiv in northern Ukraine, where attacks were being carried out earlier today.

Ukraine’s Ministry of Internal Affairs said on Thursday that at least eight people were killed and 14 more wounded during Moscow-led attacks on military units.

“Russia has attacked our military infrastructure, our border guards,” Zelensky said. “Explosions were heard in many cities of Ukraine.”

Russia has asked the United States and its allies to deny Ukraine and other former Soviet nations membership into NATO and that NATO members scale back troop deployments in Central and Eastern Europe.

In the buildup to the attack, Russian state media portrayed Moscow as coming to the rescue of war-torn areas of eastern Ukraine where residents were tormented by Ukraine’s aggression.

“You paid with your blood for these eight years of torment and anticipation,” anchor Olga Skabeyeva said during a popular political talk show Tuesday morning. “Russia will now be defending Donbas.”

But leaders from around the world have condemned Russia’s “unprovoked and unjustified attack” of Ukraine in the wake of the invasion.

President Joe Biden late Wednesday issued a statement saying that Putin “has chosen a premeditated war that will bring a catastrophic loss of life and human suffering.”

“The prayers of the entire world are with the people of Ukraine tonight as they suffer an unprovoked and unjustified attack by Russian military forces,” Biden said. “Russia alone is responsible for the death and destruction this attack will bring, and the United States and its Allies and partners will respond in a united and decisive way. The world will hold Russia accountable.”

Biden has also said he would sanction two state-owned banks, including one that services the Russian military as well as elites close to Russian President Vladimir Putin, and the country’s sovereign debt.

“It is hard to imagine that there is a person in Washington who expects Russia to revise its foreign policy under a threat of restrictions,” he wrote in a social media post. “I don’t remember a single day when our country lived without any restrictions from the Western world. We have learned to work in such conditions. And not only to survive but also to develop our state.”