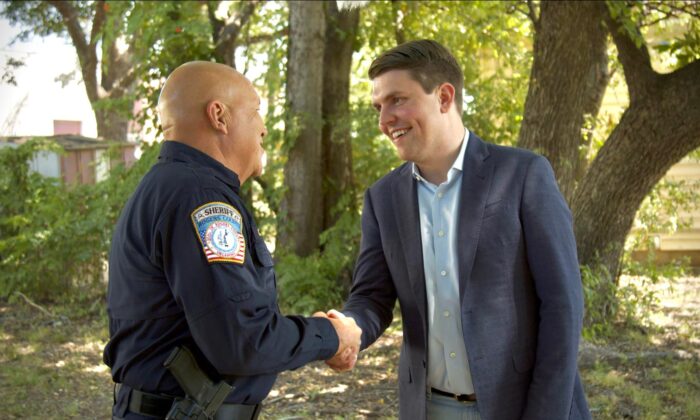 Oklahoma state Rep. Avery Frix is a Muskogee native and resident who is running for the 2nd Congressional District seat. (Courtesy of Frix for Congress)
2022 Midterm Elections

Muskogee is Front and Center in Oklahoma’s GOP Primary Runoffs

Standing outside the Greater Muskogee Area Chamber of Commerce, Dice Dawson leans against his pick-up truck and talks about how his hometown is generating regional attention for its role in the Aug. 23 Oklahoma Republican primary runoff.

Nestled along the Arkansas River around 50 miles southeast of Tulsa, Muskogee is part of Oklahoma’s 2nd Congressional District.

Rep. Markwayne Mullin has represented the region in Congress over the last decade. He is running against former Oklahoma Speaker of the House T.W. Shannon in the GOP U.S. Senate primary runoff.

Muskogee native and resident Avery Frix, a 28-year-old Oklahoma state representative who was first elected to that seat in 2017, is leading in the polls over former Oklahoma state Sen. Josh Brecheen in the race to replace Mullin.

Dawson was born and raised in Muskogee and for most of the 1970s and 1980s lived in San Francisco and Los Angeles, where he forged a career as a stand-up comic and actor. He returned to his hometown in 1993, craving a quiet and slower-paced day.

Frix, whose great-grandfather started a local construction company in 1940 that is still in business today, returned to Muskogee after earning a degree from the University of Oklahoma.

Frix also heads up the Roxy Theatre and spearheaded the Oklahoma Movie Hall of Fame being hosted in Muskogee. He owns a tourism and facility management while his wife, Haley, owns Broadway Market in downtown Muskogee.

“I grew up with his father and watched him [Avery Frix] grow up,” said Dawson, wearing an “I Voted” sticker and a T-shirt with the logo of his namesake Muskogee tennis tournament that he has hosted for more than 30 years.

“He directed a play when he was 7, started his production company at a young age, and became a state representative when many people his age were still figuring out what they wanted to do.

“I would say that he is smart and driven, and he cares about the future of Muskogee and  this district,” Dawson added.

“He is what we need in Washington, someone who is not part of the establishment and someone who has a track record of getting things done.”

As for the race between Mullin and Shannon, Dawson preferred to announce a favorite, but he did say that the endorsement of former president Donald Trump has significant impact in Muskogee County.

“If Trump says he’s for Mullin, many people around here will listen,” Dawson said. “What Trump says matters to most people in Oklahoma.”

In the 2020 presidential election, Trump won every county in Oklahoma and trounced Joe Biden by 33.08 percent and more than 500,000 votes.

Not everyone in Muskogee supports Trump and Frix, one Democratic party voter said outside the city’s Martin Luther King Center after casting his ballot.

“I’ve lived here all my life, and I’ve known Avery for years. We’ve even worked on some community projects together,” said Joseph, who asked that only his first name be used.

“I like a lot of what he’s done, but focusing his campaign around Trump this and Trump that is not appealing to me.

“No matter whether you’re a Republican, a Democrat, or an independent, we’re all human beings. We don’t all have to agree with each other all the time,” Joseph added.

Frix said that he entered the 2nd district race because he is displeased with the direction that the “liberal left” is moving America.

“We’re not going to have a country if we continue down this path that we’re headed, and that’s why I want to stand up and fight for [former] president Trump’s America First agenda,” Frix said. “We’ve got to get that accomplished, and we’ve got to get that implemented.”

Mullin, a former professional MMA fighter and an entrepreneur who owns a cattle ranch and a plumbing company among other enterprises, advanced to the runoff as the leading vote-getter among a field of 13 candidates.

Shannon—who like Mullin is campaigning on a pro-Trump, America First platform—finished second and joined Mullin in the Aug. 23 runoff.

A recent poll conducted between Aug. 11 and Aug. 15 by Oklahoma City-based Amber Integrated showed Mullin with 46 percent support among Republican voters surveyed compared to 27 percent for Shannon, while 20 percent of the respondents are undecided.

Frix is not endorsed by Trump, who did not back a candidate in the 2nd Congressional District race, but he is a loyalist to the former president.

At a debate earlier this month, Frix asserted that Brecheen is a “never Trumper” while Brecheen responded by pointing out social media posts showing his support for the former president.

The 43-year-old Brecheen—who is from Ada, Oklahoma, and lives with his wife and children on their ranch in Coal County—served for eight years in the Oklahoma State Senate while Frix has six years of experience in Oklahoma’s House of Representatives.

When the results for the June 28 Republican primary were announced, Frix finished atop a field of 14 candidates with 14.7 percent of the vote followed by Brecheen’s 13.8 percent.

According to a joint poll conducted by TV news affiliates in Oklahoma City and Tulsa on Aug. 19, Frix carried a six-point edge over Brecheen, though 42 percent of Republican voters said they were undecided.

The survey, which was conducted between Aug. 11 and Aug. 17 among likely runoff voters, reported that 27.2 percent of the undecided voters favored Frix while 21.1 percent leaned toward Brecheen.

Dawson doesn’t care about polls, he said. He likes Frix because of the Muskogee native’s appreciation of local history, and his “commitment to making this a better city.”

Country music legend Merle Haggard put Muskogee on the map with his 1969 single “Okie from Muskogee,” a song he said he wrote after he became dismayed watching Vietnam War protests.

The song reached the top of Billboard magazine’s country singles chart and remained there for four weeks.

Muskogee has long embraced its music and entertainment heritage, even long before Haggard’s song. The city is home to the Oklahoma Music Hall of Fame and Museum, and the Oklahoma Movie Hall of Fame, housed at the renovated Roxy Theater, which opened in 1948.

Frix is head of the Roxy Theatre and spearheaded the effort to launch the Oklahoma Movie Hall of Fame.

To Dawson, who still appears as an actor in regional productions, that “shows the drive that can translate to getting results in Washington.”

“So many times, politicians go to Washington for their own good and forget where they came from and who sent them there,” Dawson said. “He [Frix] is one of us and cares about the towns in this district. Muskogee will truly be represented in Washington if Avery Frix wins.”