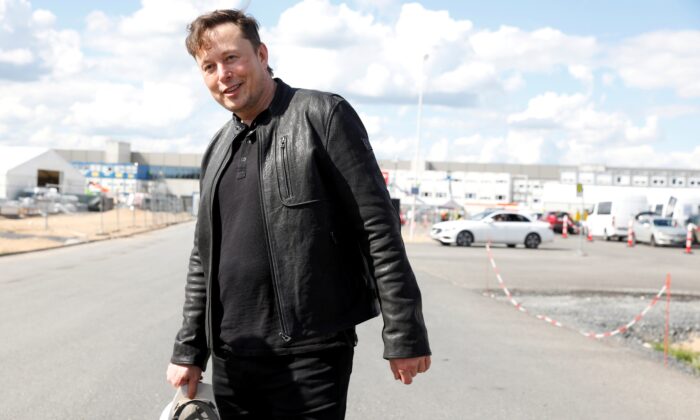 SpaceX founder and Tesla CEO Elon Musk looks on as he visits the construction site of Tesla's gigafactory in Gruenheide, near Berlin, Germany, on May 17, 2021. (Michele Tantussi/Reuters)
Markets

Musk Sells Nearly $7 Billion Worth of Tesla Shares This Week

Tesla CEO Elon Musk offloaded a combined $6.9 billion worth of shares in the electric car company this week, taking advantage of a meteoric rally that vaulted the firm’s value to over $1 trillion.

The billionaire sold 1.2 million shares held by his trust for more than $1.2 billion on Friday, the latest in a flurry of his stock transactions, according to a U.S. securities filing released later in the day.

The world’s richest person and Tesla’s top shareholder last Saturday wrote on Twitter that he would sell 10 percent of his shares if users of the social media platform approved the move. The 10 percent would be about 17 million shares at the time of his tweet.

He has sold 6.36 million shares this week—around 37 percent of 17 million. He now needs to offload about 10 million more shares to fulfill his pledge to sell 10 percent of his holdings.

Shares of Tesla Inc. closed lower on Friday, down 2.8 percent at $1,033.42, snapping an 11-week winning streak. The shares are up more than 46 percent this year following a sharp rally in October.

The stock sales, which marked the first time that Musk cashed out on a stake of that size since the company was founded in 2003, were massive by capital market standards, eclipsing the initial public offerings of most companies.

By getting Twitter users to green-light the move, he has blunted potential criticism of cashing out at a time when Tesla’s valuation has become frothy and shares are at record highs.

Still Most Valuable US Automaker

Despite the week’s losses, Tesla is still the most valuable automaker in the world. Recent strong gains in the stock have underscored demand for shares of electric vehicle (EV) makers.

After the blockbuster market debut of Rivian Automotive Inc. on Wednesday, the two most valuable U.S. automakers are EV companies.

In a veiled jab at the Irvine, California-based rival, Musk wrote on Twitter Thursday: “There have been hundreds of automotive startups, both electric & combustion, but Tesla is (the) only American carmaker to reach high volume production & positive cash flow in past 100 years.”

Musk had previously said he would have to exercise a large number of stock options this year, which would create a big tax bill. Selling some of his stock could free up funds to pay the taxes.

Prior to the sale, Musk owned a stake of about 23 percent in Tesla, including stock options. After his exercise on 2.15 million stocks on Monday, he has options for 20 million more shares he needs to exercise by next August.

“We expect the share sales will continue, as Musk holds millions of options worth billions of dollars that would otherwise expire worthless, and he has also prearranged share sales under 10b5-1 plans,” said Jason Benowitz, senior portfolio manager at the Roosevelt Investment Group LLC in New York.

By Hyunjoo Jin and Subrat Patnaik