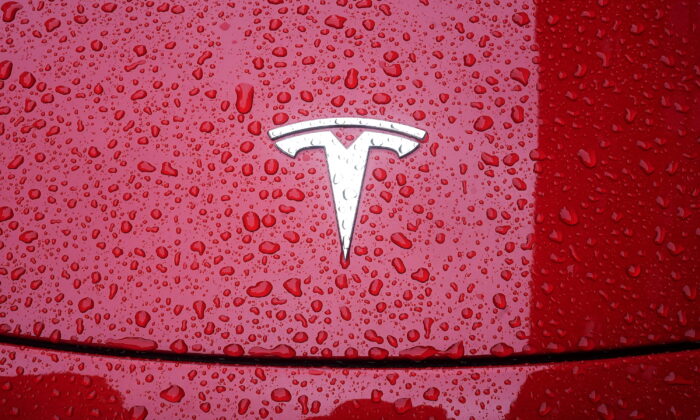 A Tesla logo is pictured on a car in the rain in the Manhattan borough of New York City, New York on May 5, 2021. (Carlo Allegri/Reuters)
Companies

The 50-year-old billionaire, wearing a black cowboy hat and sunglasses, made the comments at the opening of Tesla’s $1.1 billion factory in Texas, which is home to its new headquarters.

“Massive scale. Full self-driving. There’s going to be a dedicated robotaxi,” Musk told a large crowd at the factory.

Musk has several times missed his targets of full autonomy. In 2019, he said robotaxis with no human drivers would be available in some U.S. markets in 2020.

In January he said he would be “shocked” if Tesla did not achieve full self-driving that is safer than that of humans this year.

Tesla will expand its “Full Self-Driving” beta software to all North American FSD subscribers this year, he said on Thursday.

Tesla now sells the advanced driver assistance systems for $12,000, with a promise of more features. It says the software does not make its vehicles autonomous, and requires driver supervision.

The beta version, launched in late 2020, aims to enable cars to navigate city streets better. By January, it had been installed in nearly 60,000 vehicles in the United States.

Musk said Tesla had started deliveries of Texas-made Model Y electric sport utility vehicles, with a goal of producing half a million a year at the Texas factory, which he said would be the biggest car factory in the United States.

He gave no details of such Model Ys, but they are likely to be lower-priced versions to better take on cheaper competitors.

Tesla will start production next year of its Cybertruck as well as a humanoid robot, Optimus, Musk said.

The firm’s new giga factories in Texas and Berlin, which will make vehicles and its own battery cells, face challenges of ramping up production with new processes, analysts have said.

Despite record deliveries in the first quarter, a recent COVID-19 spike in China has forced Tesla to suspend production at its Shanghai factory for several days.

Thursday’s event comes after Musk surprised the market this week by revealing he had bought a stake of 9 percent in Twitter and will join the board of the social media network.