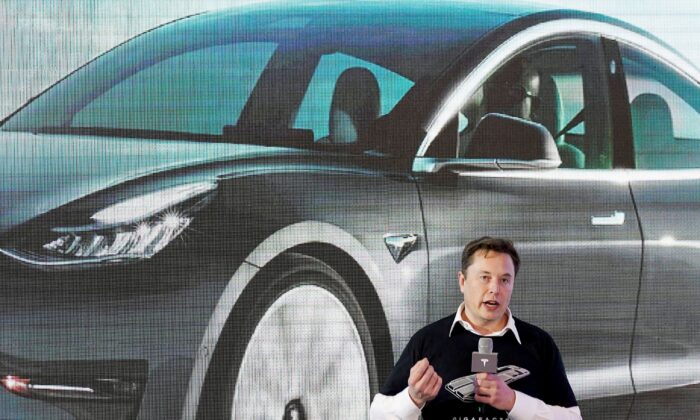 A file photo of Tesla Inc. CEO Elon Musk during a delivery event for Tesla China-made Model 3 cars at its factory in Shanghai, China, on Jan. 7, 2020. (Aly Song/File Photo/Reuters)
Companies

Tesla Inc Chief Executive Elon Musk on Saturday asked his 62.5 million followers on Twitter in a poll if he should sell 10 percent of his Tesla stock.

“Much is made lately of unrealized gains being a means of tax avoidance, so I propose selling 10% of my Tesla stock,” Musk wrote in a tweet referring to a “billionaires’ tax” proposed by Democrats in the U.S. Senate.

Musk tweeted that he will abide by the results of the poll, whichever way it goes.

The poll received over 700,000 responses in one hour since he posted it, with nearly 56 percent of respondents approving the proposal to sell the shares.

Musk’s shareholding in Tesla comes to about 170.5 million shares as of June 30 and selling 10 percent of his stock would amount close to $21 billion based on Friday’s closing, according to Reuters calculations.

Analysts say he may have to offload a significant number of shares anyway to pay taxes since a large number of options will expire next year.

The comments from Musk comes after the proposal in the U.S. congress to tax billionaires’ assets to help pay for President Joe Biden’s social and climate-change agenda.

Musk is one of the world’s richest people and owner of several futuristic companies, including SpaceX and Neuralink. He has previously criticized the billionaires’ tax on Twitter.

“Note, I do not take a cash salary or bonus from anywhere. I only have stock, thus the only way for me to pay taxes personally is to sell stock,” Musk said on Twitter.