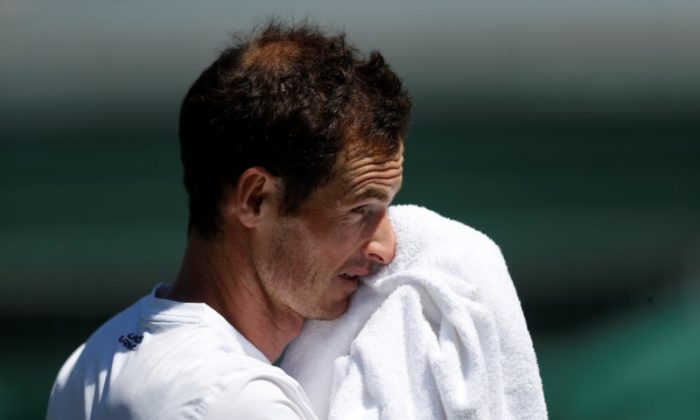 LONDON—Two-time champion Andy Murray withdrew from Wimbledon with a “heavy heart” on Sunday after saying his right hip was still not ready for the demands of a Grand Slam.

The 31-year-old Scot made a comeback last month at Queen’s Club following almost a year out with the injury that required surgery in Australia in January.

During a news conference on Saturday the former world number one sounded hopeful about his chances of being ready to face Frenchman Benoit Paire in the first round on Tuesday.

But he announced he was pulling out 24 hours later having consulted his team. It is the first time Murray has missed Wimbledon since 2007 when a wrist injury ruled him out.

“It is with a heavy heart that I’m announcing that I’ll be withdrawing from Wimbledon this year,” Murray, who ended a 77-year wait for a British men’s champion at Wimbledon when he beat Novak Djokovic in the 2013 final, said on Twitter.

“I’ve made significant progress in practice and in matches over the last 10 days, but after lengthy discussions with my team we’ve decided that playing best-of-five-set matches might be a bit too soon in the recovery process.

“We did everything we could to try and be ready in time.”

On a more positive note Murray said he would continue practicing on Monday and would now target a return in the U.S. hardcourt season in time for the U.S. Open.

“I will start practicing on the hard courts from tomorrow and continuing with my rehab and recovery and I’m looking forward to the U.S. hardcourt season,” he said.

“Thanks for all the messages of support and I’m excited to finally be back playing after so long out.”

Murray’s withdrawal is a big blow for the tournament which he also won in 2016—the year he reached the top of the ATP rankings for the first time.

However, he had admitted on Saturday that he needed to take a smarter approach to protecting his body.

Former world number one Mats Wilander said this week that only eight-times Wimbledon champion Roger Federer was a bigger name at the grasscourt major than Murray.

“He adds so much to the tournament, it makes for an unbelievable atmosphere to have him back,” Eurosport analyst Wilander told Reuters this week.

Murray, ranked 156th in the ATP standings, now faces the prospect of losing virtually all of his ranking points having reached the quarter-finals last year where he hobbled to defeat against American Sam Querrey.

After Wimbledon he will lose 360 of the 380 points he currently holds, leaving him down in the 800s.