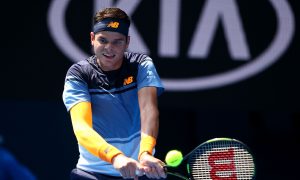 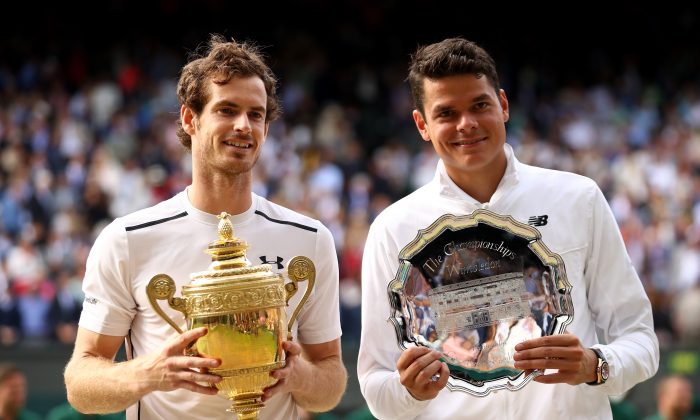 Andy Murray and Milos Raonic hold their trophies after the men’s final on July 10, 2016 in London, England. Murray won his second Wimbledon title against the Canadian playing in his first major final. (Julian Finney/Getty Images)
Canada

Andy Murray finally faced somebody other than Roger Federer or Novak Djokovic in a major final. It was an opportunity too good to pass up for the Scot whose potential has been blighted in a unique era of dominance in men’s tennis.

Including Federer’s first major title (Wimbledon 2003), there have been 53 grand slams played. Federer, Rafael Nadal, and Djokovic hold 43 of those titles.  Thus, Murray entered the 2016 Wimbledon final with a 2–8 record in major finals.

And he didn’t pass up his chance playing flawlessly against Canadian Milos Raonic.

“This win feels extra special because of the tough losses,” Murray said in his on-court interview after the win.

Whether it’s the “Big 3” of Federer, Djokovic, and Nadal or the “Big 4” (tacking on Murray), dominance by a select few in men’s tennis remains the norm. The next wave of champions, which will likely include Raonic, has to wait.

Murray deservingly claimed his second Wimbledon crown and third major title, and served notice that, at 29, he belongs among tennis’ elite.

“He’s playing better than he’s ever played in his entire life right now,” said ESPN’s John McEnroe commenting on Murray’s play after he took the lead in the first set. McEnroe worked as a consultant with Raonic throughout the grass court season.

This win feels extra special because of the tough losses.
— Andy Murray

His superior athleticism and consistency—just 12 unforced errors—allowed him to best Raonic. When it comes to major finals, he showed his experience, which distinguishes an elite player from pretenders to the crown.

At one point, Murray returned a 147 mph serve—the second fastest in Wimbledon history—and won the point. He handled Raonic with ease in the two tiebreaks; the Canadian owned a 20–6 tiebreak record for 2016 coming into the match.

Raonic gave all he had to beat Federer in the semifinal, coming back from a two sets to one deficit. But Murray’s defense and consistency was superior. His return game blunted the Raonic power, which was so key against Federer.

For Raonic, the first Canadian male to play in a grand slam final, it proved to be another lesson. He reached three Masters 1000 finals—the next highest level of tournaments after the grand slams—but lost them to members of the Big 4: Nadal (Montreal 2013) and Djokovic (Paris 2014, Indian Wells 2016).

And as for the next wave of potential grand slam winners, Raonic looks like he’s the leading contender. The Canadian of Montenegrin descent is having his best year on tour. He reached the Australian Open semifinal earlier this year, his second major semifinal prior to this year’s Wimbledon.

“This one’s going to sting,” Raonic said after the match. “Nothing I want more than to be back here.”

At 25, Raonic has time on his side and no doubt after reaching his first major final is expected to be in many more before his career is done. He is leading the charge for Canada—emerging as a tennis powerhouse nation with countryman Denis Shapovalov winning the boys’ singles title earlier in the day.

But Wimbledon 2016 will be remembered for Andy Murray’s phenomenal performance and a notice that it’s still too early to say Djokovic can be the greatest of all time after the Serb won the 2016 French Open, which completed his career grand slam.

No doubt Djokovic will redouble his efforts to capitalize on these critical years to rack up more slam titles. He’ll be the favorite for the U.S. Open, but Murray will be right there with him.