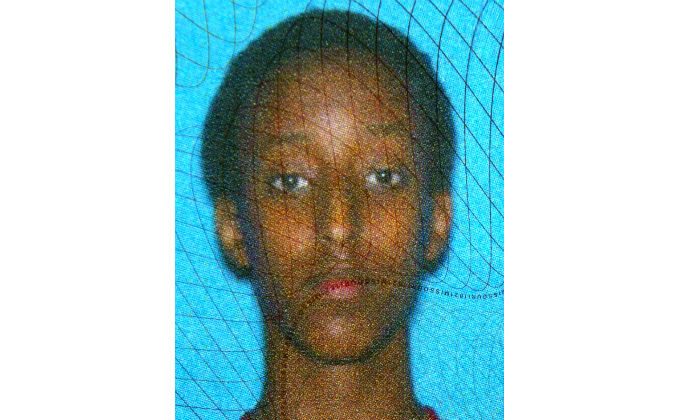 A Department of Motor Vehicles photo courtesy the family shows Abdisamad Sheikh-Hussein. The 15-year-old was struck and killed by a hit-and-run driver in front of the Somali Center of Kansas City, Mo., Thursday, Dec. 4, 2014. (AP Photo)
News

Murder of Muslim Teenager in Kansas Investigated as Hate Crime

KANSAS CITY, Mo.—Friends of a Muslim teenager who was run down and killed in a crash that’s being investigated as a possible hate crime said they had been alarmed in recent weeks by someone driving around with anti-Islamic messages painted on a vehicle.

Police haven’t said whether the crash and the messages are connected and there’s no mention of them in court records. But people at the Somali Center of Kansas City say they were alarmed enough to call police.

Ahmed H. Aden, 34, of Kansas City, was charged Friday in Jackson County with first-degree murder and armed criminal action in the crash that fatally injured 15-year-old Abdisamad Sheikh-Hussein on Thursday night at the center. Funeral services for Abdisamad are scheduled for 1 p.m. Saturday at the Islamic Society of Greater Kansas City.

According to a probable cause statement, Aden was driving the sport utility vehicle that hit the teen as the boy got into a car Thursday evening. A witness reported seeing the teen “fly through the air” before the SUV ran over him. The teen’s legs were nearly severed, and he died in a hospital of his wounds.

Prosecutors are requesting a $250,000 bond. No attorney is listed for Aden in online court records.

In the weeks before the crash, worshippers said they saw a black SUV painted with threatening messages at the center and cruising around a nearby shopping area. One of the messages was “Islam Is Worse Than Ebola,” said Mohamed Ahmed, 13, of Kansas City.

Mohamed Farah, a 50-year-old friend of the boy’s family, said he called police more than once in October about a suspicious man who was coming around the center.

“I feel like I lost a part of my body,” he said after the teen’s death.

Court documents said Aden crashed the SUV and got out of the vehicle with a knife. Occupants of the car told officers they followed Aden, and they pointed him out to police. One witness said the suspect swung what appeared to be a baseball bat at people, and another witness reported that Aden pulled out a handgun and said to “Stay there” as he tried to get away.

Aden initially told authorities that he lost control of his vehicle and that there was an accident. He later said he struck the teen because he thought he looked like a man who had threatened him several days earlier, the probable cause statement said.

Federal agents are assisting in the investigation and “also have opened this matter as a federal civil rights investigation as a potential hate crimes violation,” according to FBI spokeswoman Bridget Patton. Patton said she couldn’t release any information on why the case could be considered a hate crime.

Bakar Abdalla, 31, of Kansas City, said the boy’s father was a teacher at the center.

Khadra Dirir, the victim’s aunt, said her nephew regularly studied the Quran and had delivered a group prayer the night he died.

“If you asked him a verse, he could tell the chapter,” she said.