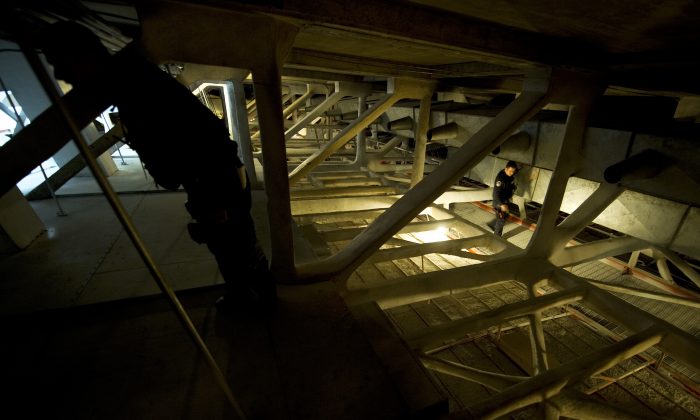 A file photo of the attic above the House chamber on Capitol Hill in Washington, D.C. Rummaging through attics can uncover the usual family memorabilia, or some more bizarre items as the August 2013 discovery of a mummy in a German attic shows. (Jim Watson/AFP/Getty Images)
Good to Know

Mummy Found in German Attic and Other Bizarre Attic Finds

A 10-year-old boy in Diepholz, Germany, found a mummy in a sarcophagus in his grandparents’ attic in August, reported on by local publication Kreiszeitung Wednesday.

Upon first investigation, the mummy appeared to be some 2,000 years old. But, the bandages wrapping the mummy were made in the 20th century.

The boy’s grandfather, who died 12 years ago, traveled to North Africa in the 1950s where he may have obtained the mummy. Investigators are testing the age of the bones to ensure they did not come from a relatively recent victim of a violent crime.

Alexander Kettler is the boy who made the discovery; the boy’s father, dentist Lutz Wolfgang Kettler, told Der Spiegel he thinks it is possible his father had the mummy shipped from North Africa though the family didn’t know about it.

“He was of the older generation who experienced a lot in the war and didn’t really talk about anything,” Kettler said.

Here’s a look at a few other bizarre attic finds.

In September 2012, a woman in South Carolina heard a bump in her attic and noticed the nails starting to come out of the ceiling in her bedroom.

She had her older sons investigate when she felt “something just ain’t right,” she told the Charlotte Observer.

She thought “there was some poltergeist stuff going on.”

They didn’t find anything. She called her nephew over. He explored the attic, reaching the heating unit at the far end—that’s where he found a man sleeping, a man Tracy (last name withheld) had broken up with 12 years before.

The man was released from prison a couple weeks before he was found in the attic. From the heating unit, he could peek into Tracy’s room through a vent.

In 2011 in Halifax, Canada, some home inspectors were sweeping through an unoccupied home on behalf of a buyer.

Inspector Scott Davis was looking for a way into the attic when he pushed up a ceiling tile, reported the Cape Breton Post. He found a stash of $10,000.

The $20 bills were of an older design, showing the money had placed there in the 1980s or earlier.

In 2011 in Utah Josh Ferrin found a $45,000 stash in the attic of his new home and returned it to the previous owners.

“I’ve got two boys and we teach them to be honest and to do what is right and I knew this was a teachable moment that I would never get back again,” Ferrin, of Bountiful, Utah, told ABC News.

The 400-Year-Old Head of King Henry IV of France

The head of King Henry IV of France who ruled in the 17th century was pillaged from a grave during the French Revolution, reports CBS News.

Henry IV was the grandfather of Sun King Louis XIV. Journalist Stephane Gabet searched for the head in 2010, following a lead that brought him to the attic of retired tax collector Jacques Bellanger.

Sure enough, he found a mummified head.

“Having a mummified head, you know you’ve got an archaeological relic,” Gabet told CBS.

Scientists confirmed the head belonged to the monarch.

Bellanger avoided media inquiries at the time, but willingly relinquished the skull to a descendant of Henry IV.