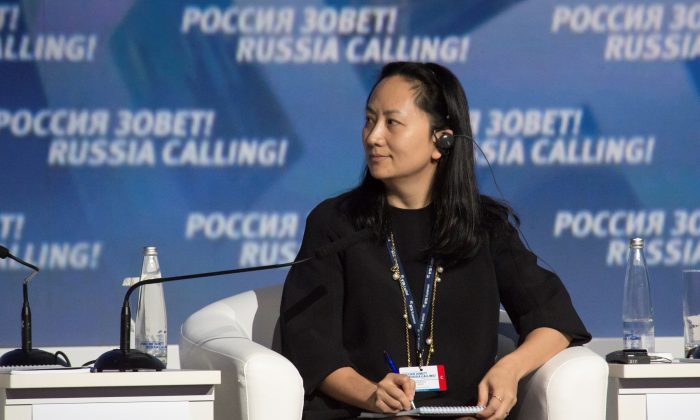 Meng Wanzhou, Executive Board Director and CFO of the Chinese technology giant Huawei, attends a session of the VTB Capital Investment Forum "Russia Calling!" in Moscow on Oct. 2, 2014. Meng Wanzhou, deputy chair of Huawei's board, was arrested in Canada on Dec. 1, 2018 on suspicion she violated U.S. trade sanctions. (Alexander Bibik/Reuters)
China Business & Economy

Meng has eight passports issued by Chinese and Hong Kong authorities, according to reports
By Nicole Hao

Meng Wanzhou, CFO and vice chairwoman of major tech company Huawei who was recently arrested by the Canadian government, has held at least seven passports over the past 11 years, according to U.S. authorities.

Hong Kong’s Ming Pao newspaper reported Dec. 8 that Meng had an eighth passport that she used in Hong Kong in 2004 for a Huawei anniversarial event. According to a document from the Hong Kong Companies Registry, Meng used a Chinese passport with the number starting in “P” to register the event.

Meng is the oldest child of Huawei founder Ren Zhengfei and was widely believed to be next in line to assume leadership over the military-linked company.

On Dec. 1, Meng was arrested in Vancouver with a suspicion of violating U.S. sanctions against Iran when she travelled from Hong Kong to Mexico via Canada. The United States accused Huawei of using its subsidiary, Hong Kong Skycom, to do business with Iranian telecommunications companies between 2009 and 2014. Meng was allegedly involved in these deals.

On Dec. 7, several Canadian news outlets, including CBC, reported that in Meng’s bail hearing held at the British Columbia Supreme Court in Vancouver, documents from the U.S. indicated that Meng possessed “no fewer than seven passports from both China and Hong Kong.”

The bail hearing for Meng Wanzhou in Vancouver on Dec. 7 will continue on Dec. 10.

In court, Meng’s lawyer, David Martin said that Meng has two valid passports, one of which, issued by the Hong Kong authorities, was used by Meng to travel in Canada. Another passport, issued by China, was delivered to Canada following Meng’s arrest.

In mainland China, there are four types of passport, with numbers beginning with letters G or E, P, S, and D. Passports labelled with “S” are service passports, and “D” indicates diplomatic status.

G and E passports are for the general public, with E denoting the upgraded biometric passport that has been in use since May 2012.

The P passport, which Meng Wanzhou reportedly possesses, is for public affairs. It is granted to government clerks and employees of state-owned enterprises. P passports are within the family of “S” service passports.

Before reforms made in 2007, all China-issued passports were valid for five years. In 2007, the validity period of S, D, and P passports was shortened to four years, while G and E passports had their expiry dates extended to ten years from date of issue.

The fact that Meng has had four Chinese passports issued to her in the past 11 years despite the validity period being four years has raised questions. Also intriguing is the fact that she possesses Hong Kong passports, while by law Chinese are not allowed to hold dual citizenship and must revoke their Chinese passport if they gain a Hong Kong passport.

Hong Kong and neighboring Macau are former British and Portuguese colonies administered as a part of China, but are allowed some functions of self-rule, including separate citizenship.

Conventionally, while Meng should have been able to keep both Chinese and Hong Kong passports, she would have had to give one of them up applying for travel documents that would allow her to go between the mainland, Hong Kong, or Macau.

The situation has brought up question about which document Meng uses for her travel between China and Hong Kong.

Besides her Chinese and Hong Kong citizenship, Meng had once received permanent residency in Canada, which expired in 2009.