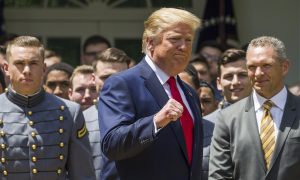 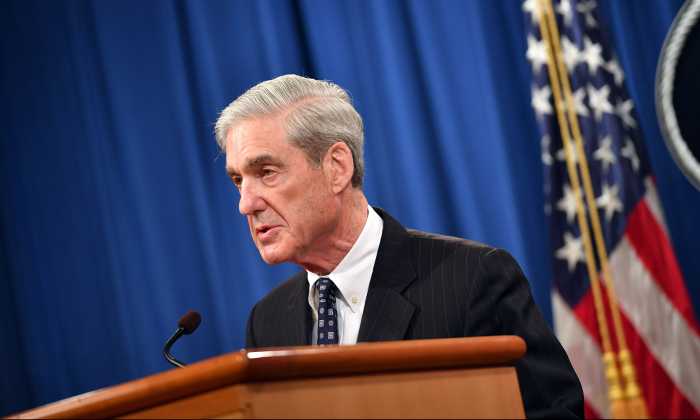 Special Counsel Robert Mueller speaks on the investigation into Russian interference in the 2016 Presidential election, at the US Justice Department in Washington, DC, on May 29, 2019. (Mandel Ngan/AFP/Getty Images)
Politics

Special counsel Robert Mueller on May 29 formally closed the special counsel office, announced an end to the Russia investigation, and said he will return to private life.

Mueller, speaking before reporters at the Department of Justice, said he will make no further comments about the investigation. The special counsel reiterated the findings of his final report and said any further inquiries should refer to the document as his testimony.

The special counsel concluded that there is not enough evidence to establish that President Donald Trump, or anyone on the Trump campaign, colluded with Russia. Mueller also decided against charging the president with obstruction of justice.

After Barr released the report, the Democrat-led House Judiciary Committee issued a subpoena for a full unredacted version of the document and requested that Mueller appear to testify about the report.

The negotiations for the testimony stalled after the White House asserted executive privilege over the Mueller report in response to a Democrat-led effort to initiate contempt proceedings against Barr.

Rep. Jerrold Nadler (D-N.Y.) told Rachel Maddow on May 23 that Mueller wanted to testify in a private session. Mueller would make his opening statement publicly but asked to take the rest of the session behind closed doors. Nadler speculated that Mueller wanted to testify in private because he “doesn’t want to participate in anything that he might regard as a political spectacle.”

While Trump has said he doesn’t want Mueller to testify, Barr has said the decision is up to Mueller himself.

The White House was notified the night before May 29 that Mueller may make a statement at the Justice Department.

Mueller’s announcement comes one day after the special counsel’s office denied a claim in an upcoming book that Mueller had drawn up an indictment charging the president with obstruction of justice.

“The documents that you’ve described do not exist,” a spokesman for Mueller’s office said.

A significant portion of the Mueller report deals with instances of potential obstruction of justice by Trump. But Mueller did not charge the president with obstruction of justice. Barr and Deputy Attorney General Rod Rosenstein reviewed the report and determined there was not enough evidence to bring an obstruction charge in a court of law.

Democrats have nonetheless seized on the fact that Mueller did not draw a conclusion regarding obstruction of justice charges. Two separate House committees have also issued subpoenas for the unredacted Mueller report.

Barr has made a minimally redacted version of the report available to members of Congress. As of May 8, not a single Democrat has viewed the less-redacted report, including the lawmakers who have issued the subpoena for the full document, according to White House Press Secretary Sarah Sanders.