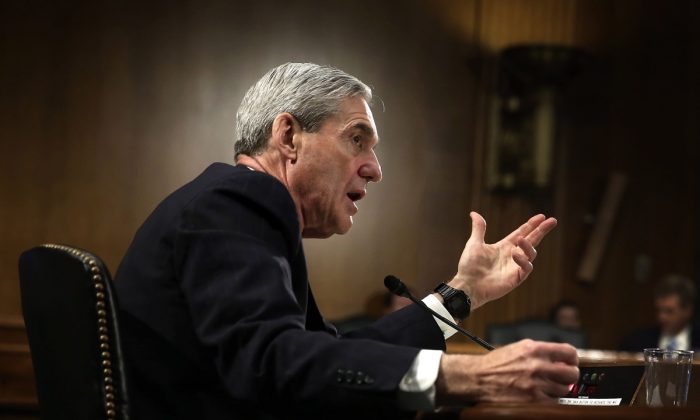 NEW YORK—Former special counsel Robert Mueller is set to testify before the United States Congress on July 24 to answer questions related to the two-year-long investigation into allegations of collusion between the Trump campaign and Russia to interfere in the 2016 presidential election.

In May, U.S. District Court Judge Dabney L. Friedrich issued an order warning the special counsel team not to present allegations as facts in their statements regarding Russia’s connection to the firms which allegedly carried out a social media influence operation.

Friedrich ordered “that the government shall refrain from making or authorizing any public statements that links the alleged conspiracy in the indictment to the Russian government or its agencies.”

Ivan Pentchoukov, senior political editor at The Epoch Times, noted that Mueller’s evidence of Russian interference will remain alleged until the court rules that the accused are guilty.

“Mueller’s report, and actually even Attorney General Barr made statements about the social media interference that actually remain unproven in the ongoing case of Mueller’s, where the government has not been able yet to establish that Russia was connected to the social media firms to interfere in the election,” Pentchoukov said.

House intelligence and judiciary committees are expected to try and push Mueller for new details, but he is expected to keep his answers to content within his public report.

The Department of Justice asked Mueller not to stray from his redacted version of the report, drawing criticism from Democratic lawmakers.

However, in an interview with Fox News, William Barr said that it was Mueller’s team that asked the Department of Justice to send a letter making that request.

The central theme of the Mueller report is that Russia interfered in the U.S. election using two different methods: alleged social media trolls and hacking.

“The underlying evidence for either of those has not been presented in the report,” said Pentchoukov. “Much of the things are either circumstantial or alleged.”

Pentchoukov said it appears Mueller did not follow serious avenues of investigation to determine the origins of the hack, or who really perpetrated the social media interference.

“When it comes to the hack, Mueller, according to the report, never interviewed Julian Assange, the man who runs WikiLeaks which released the DNC emails,” said Pentchoukov.

Bill Binney, former NSA Technical Director for World Geopolitical and Military Analysis, performed forensic analysis on the stolen emails and determined they were leaked by someone with physical access to the DNC server.

“Bill Binney states, and he’s not the only one to say this, that the DNC servers were not hacked by a remote entity like Russia,” said Pentchoukov. “But were actually accessed by someone on the inside of the DNC and had been leaked to Wikileaks.”

Pentchoukov pointed out Mueller never examined the physical DNC servers which were hacked.

“These are crucial parts of the investigation which should have been undertaken by Mueller. But they were not.”

At Turning Point USA’s Teen Student Action Summit 2019 in Washington on July 23, President Trump commented on what he called the “Russian witch hunt.”

“No collusion, no obstruction,” said Trump in his speech. “Oh, that’s not good enough. Let’s go more. Forty million dollars, interview 500 people, they got nothing.”

Trump pointed out that Attorney General Barr had found no obstruction in Mueller’s report.

“I personally think it’s hurting them,” said Trump. “A lot of people think it’s very bad for them but it just goes on.”

Trump was referring to the House Democrats that subpoenaed Mueller to appear before Congress, even after Mueller repeatedly stated he did not want to testify and if called on would stay within the 448-page redacted report he had already released.

Mueller concluded in the report there was insufficient evidence to establish that Trump or anyone on his campaign conspired with Russia to influence the 2016 election.

Corrections: A previous version of this article incorrectly stated that “there is still no evidence of Russian interference.” The article was updated on Aug. 8, 2019, to more accurately reflect the order issued by U.S. District Court Judge Dabney L. Friedrich, in which he warned the special counsel team to “refrain from making or authorizing any public statements that links the alleged conspiracy in the indictment to the Russian government or its agencies.” The article has also been updated to clarify that Mueller stated there was insufficient evidence to establish that Trump or anyone in his campaign colluded with Russia.