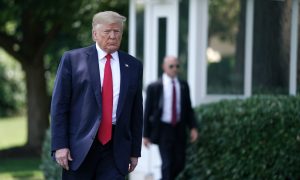 President Trump: Mueller Testimony Is a 'Diversion' From 'Tremendous Criminal Activity' on Other Side
0
Share Now
TelegramFacebookTweetEmailTellMeWeReddit
Copy Link 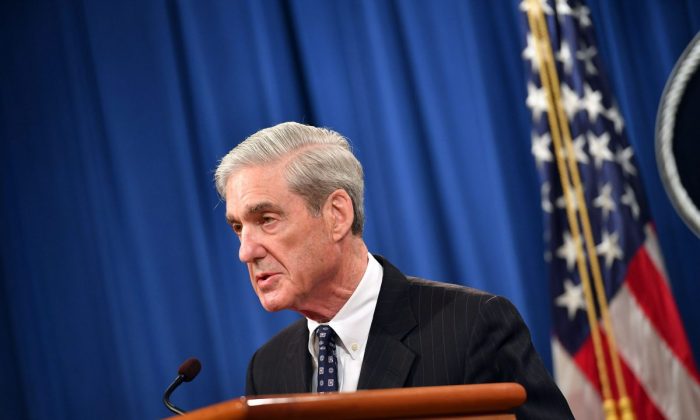 Special counsel Robert Mueller speaks on the investigation into Russian interference in the 2016 presidential election, at the Justice Department in Washington on May 29, 2019. (Mandel Ngan/AFP/Getty Images)
Politics

A federal judge in Washington issued an order in late May finding that special counsel Robert Mueller broke a local law when he presented allegations as facts in statements about Russia’s role in an alleged social media operation meant to influence the 2016 presidential election.

The judge cautioned Mueller that further statements would have a larger repercussion than a mere warning. Beyond the reprimand, the judge’s order was a minute proceeding in a larger case, yet it underlined the unproven nature of the allegations that made up the core of Mueller’s Russian election meddling narrative.

Mueller’s final report alleged that Russia attempted to interfere in the 2016 presidential election using trolls to sow chaos on social media and hackers to steal emails and release them ahead of the election.

The accusations, however, remain only alleged. Mueller filed a pair of indictments against the purported trolls and hackers. All of the charged people and entities in the hacking indictment are in Russia and the case will likely never go to trial. Meanwhile, the companies charged in the troll case retained lawyers and have battled Mueller’s team in court for months.

In late May, the judge in the troll case dealt a blow to Mueller, informing the special counsel that he violated local law by making public statements linking the companies charged in the indictment to Russia. The judge declined to initiate contempt proceedings against Mueller, but warned that further statements would have repercussions.

U.S. District Court Judge Dabney Friedrich issued the warning verbally on May 28 and formally on May 29 (pdf) in response to a motion by the defendant, Concord Management LLC, which cited multiple instances in the Mueller report where the conduct alleged in the indictment was presented as an established fact. On May 29, Mueller made his first public statement, appropriately prefacing all of the crimes as alleged.

In essence, the judge castigated the special counsel for presenting unproven allegations as facts. The same can be said about the entire Russian-interference narrative in the Mueller report, which rests entirely on unproven allegations in indictments for which no one has been found guilty.

Prior to Mueller’s report and indictments, the public knowledge of Russian meddling was based on an intelligence community assessment that represented the views of the CIA, FBI, and NSA. Similar to Mueller, the intelligence agencies have not yet provided any evidence to substantiate their claims. The authors of the assessment (pdf) themselves say that their “judgments are not intended to imply that we have proof that shows something to be a fact.”

Mueller was expected to testify before Congress on July 17, but the hearing has been postponed. It’s unclear, given the judge’s warning, how the special counsel would answer if asked whether he can definitively state that Russia interfered in the 2016 presidential election using social media trolls. Repeating some of the statements in the Mueller report would amount to contempt of the judge’s order.

When it comes to dealing with foreign nations, it’s a given that some allegations can never stand the test of a trial. For example, there is no trial that can test Washington’s claim that Tehran was involved in the attack of oil tankers in the Gulf of Hormuz. But lacking a trial, the government can always present evidence. In the case of the tanker attacks, Washington released video footage showing what appears to be Iranian military scooping up an unexploded Iranian mine from one of the tankers.

Mueller presented no hard evidence of the Russian interference and appears to have omitted significant avenues that could lead to obtaining it. The special counsel never examined the physical Democratic National Committee (DNC) server the Russians allegedly hacked. According to the Mueller report, the FBI “received images of DNC servers and copies of relevant traffic logs.”

Julian Assange, the founder of WikiLeaks, claims that the special counsel never attempted to interview him. WikiLeaks released some of the emails allegedly stolen by the Russian hackers. Assange claims to know the identity of the person who provided the emails to WikiLeaks.

The lack of evidence would be less unsettling were it not for the challenges to Mueller’s version of events coming from reputable sources. A group of former intelligence officers, including NSA Technical Director for World Geopolitical and Military Analysis Bill Binney, conducted a forensic analysis on the stolen emails and determined that the emails were leaked by someone with physical access to the DNC server.

“Key among the findings of the independent forensic investigations is the conclusion that the DNC data was copied onto a storage device at a speed that far exceeds an Internet capability for a remote hack,” the group, Veteran Intelligence Professionals for Sanity (VIPS), wrote in a letter addressed to Trump. “Of equal importance, the forensics show that the copying was performed on the East coast of the U.S.”

VIPS had previously produced some of the most credible analyses of the Bush administration’s mishandling of data prior to the invasion of Iraq.

In an analysis of the VIPS memo conducted for The Nation, Nathan Freitas of the Guardian Project noted several possibilities in which the server may have been hacked from the outside, but didn’t rule out a leak.

Several members of VIPS have since presented a dissenting view to the assessment, while a group that includes Binney continues to stand by the assessment that the DNC was the target of a leak by an insider.

When Assange was asked about the source of the DNC emails in an interview with a Dutch media, Assange declined to name anyone, but referenced Seth Rich, a senior DNC staffer who was murdered in Washington on July 10, 2016.

Shortly after Assange’s interview, WikiLeaks offered $20,000 for information leading to a conviction in Rich’s murder. WikiLeaks later released a statement clarifying that the reward offer wasn’t meant to imply that Rich was a source for WikiLeaks or that his murder was linked to its publications.