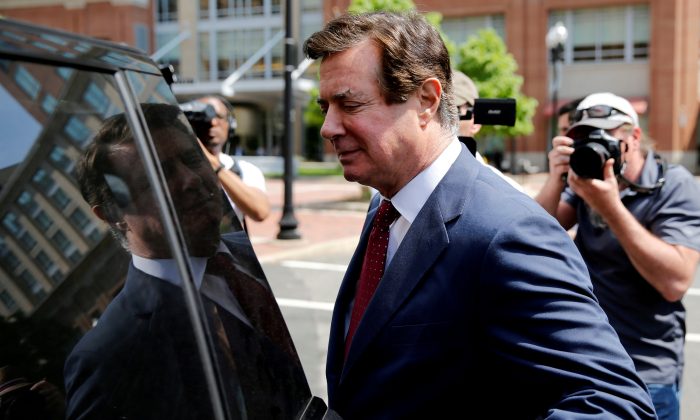 Prosecutors from the office of special counsel Robert Mueller alleged that former Trump campaign chairman Paul Manafort lied to investigators and breached his plea deal. Mueller’s team made the allegations on Nov. 26 as part of a joint filing (pdf) with the defense team.

“After signing the plea agreement, Manafort committed federal crimes by lying to the Federal Bureau of Investigation and the Special Counsel’s Office on a variety of subject matters, which constitute breaches of the agreement,” Mueller’s team alleged in the filing.

Prosecutors for the special counsel said they plan to detail “the nature of the defendant’s crimes and lies” in a separate filing ahead of the sentencing.

Manafort’s attorneys disagreed with the allegation, telling the court that their client met with investigators on many occasions to answer their questions.

Unable to resolve the conflict, the two sides asked the U.S. District Court in Washington to set a sentencing date.

Manafort pleaded guilty in August to two charges of criminal conspiracy as part of a plea deal with Mueller. The deal required Manafort to cooperate with investigators and barred him from engaging in criminal conduct. A breach of the agreement relieves the government of its obligations but leaves Manafort’s guilty plea intact, according to the prosecutors.

Manafort was already convicted of eight felony charges of financial wrongdoing in a separate case in Virginia, where he is scheduled to be sentenced Feb. 8. The jury in the Virginia case deadlocked on 10 of the 18 charges. The court dismissed the deadlocked charges in October.

Mueller indicted Manafort as part of an investigation into allegations of collusion between the Trump campaign and Russia. None of the charges against Manafort, or any of the other people Mueller indicted, are related to collusion.

Manafort, 69, faces up to 31 years in prison depending on the sentencing decisions of the judges in Virginia and Washington. He has been held in solitary confinement at a detention center in Virginia.

President Donald Trump is a fierce critic of Mueller’s investigation. On Nov. 27, the president called the probe a “phony witch hunt” led by a “conflicted prosecutor gone rogue.”

“Wait until it comes out how horribly & viciously they are treating people, ruining lives for them refusing to lie,” Trump said on Twitter.

“The Fake News Media builds Bob Mueller up as a Saint, when in actuality he is the exact opposite. He is doing TREMENDOUS damage to our Criminal Justice System, where he is only looking at one side and not the other.”

On the same day as the latest development in the Manafort case, former Trump-campaign associate George Papadopoulos started serving a 14-day sentence for lying to the FBI.