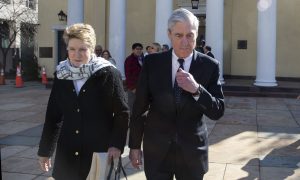 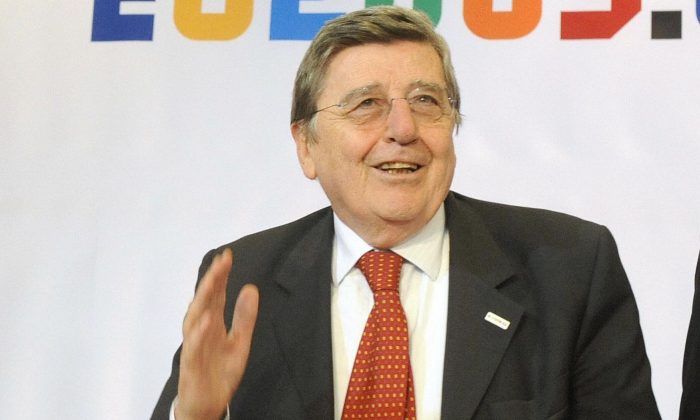 Italian undersecretary of state at the Ministry of Foreign Affairs, Vincenzo Scotti, in Prague on May 13, 2009. (Michal Cizek/AFP/Getty Images)
US News

The final report of special counsel Robert Mueller failed to explore illuminating background of one of the main actors in the Russia “collusion” narrative.

Information obtained by The Epoch Times indicates that Joseph Mifsud, the academic whose interactions with Trump campaign aide George Papadopoulos ultimately produced the justification for the FBI to investigate several Trump campaign staff members, may have acted under the supervision of, or at least with the knowledge of, former Italian interior minister Vincenzo Scotti.

Mueller took over the FBI counterintelligence investigation into alleged Trump–Russia “collusion” in 2017 and, in March, concluded that “the investigation did not establish that members of the Trump Campaign conspired or coordinated with the Russian government in its election interference activities.”

Mifsud was described in Mueller’s report as a London-based professor who “maintained various Russian contacts.” (pdf) The report makes no mention of Mifsud’s longtime association with Scotti or with the peculiar institution that Scotti headed—Link Campus University in Rome.

It was Scotti who asked Mifsud to co-host a table at a March 2016 dinner, a table that also happened to seat Papadopoulos and allowed the two to meet for the first time, according to Mifsud’s May 2018 deposition with his lawyer, Stephan Roh.

It was also Scotti who then suggested to Mifsud that he should connect Papadopoulos with Mifsud’s Russian contacts, according to Roh.

Mifsud “was reporting all and everything, [including] Russia matters to Scotti, and Scotti gave instructions to Mifsud,” Roh said in an email.

Even after Mifsud was questioned by the FBI in February 2017 about his interactions with Papadopoulos, Mifsud was still communicating with at least one of his Russian contacts, Ivan Timofeev, while having Scotti in the loop, according to a March 13, 2017, email from Timofeev to Mifsud, which has Scotti as well as others at Link in carbon copy. A screenshot of the email was provided to The Epoch Times by Roh.

Timofeev, an academic with a think tank tied to the Russian Foreign Affairs Ministry, was the only person with ties to the Russian government whom Mifsud introduced to Papadopoulos.

“You can see that Ivan Timofeev was in contact with the Link principals, and with Scotti,” Roh said. “Scotti was involved in the Timofeev matter.”

Roh’s information adds to the instances of selective editing in the Mueller report that consistently skewed the information in a way that made it look more unfavorable toward President Donald Trump.

Scotti didn’t immediately respond to a request for comment.

A Naples native with an economics degree, Scotti held various posts in the Italian government since the 1960s. His career culminated with the interior minister post from 1990 to 1992, when he oversaw the country’s domestic intelligence apparatus. Later in 1992, he also served a short stint as the minister of foreign affairs. The last time he held public office was from 2008 to 2011, as the undersecretary of state at the foreign affairs ministry.

Scotti has been Link’s director while Mifsud was its “director of international relations” and recruited foreign students for Link.

Aside from courses in the arts, communication, business, and political sciences, Link also offered master’s degrees in “Intelligence and Security” as well as “Behavioral Analysis and Applied Sciences to Investigations, the Intelligence and Homeland Security.” These two courses of study later disappeared from Link’s website.

Officials from the FBI, CIA, and other Western security and intelligence agencies attended events at or taught at Link.

Some of Link’s staff even went on to take prominent diplomatic, security, and intelligence posts in the Italian government.

Over the years, Mifsud held posts at several other entities at least some of which tie back to Link. He headed the Euro-Mediterranean University for several years, where Link ran a master’s and a post-grad course. He headed the London Academy of Diplomacy for several years, which had a “framework agreement” with Link. Mifsud was listed as a board adviser and, after July 2016, director of international strategic development at the London Centre of International Law Practice, whose staff attended the Link event where Mifsud met Papadopulos.

After Mifsud and Papadopoulos met, they remained in contact and twice met in London. During the second meeting, on April 26, 2016, Mifsud told Papadopoulos that Russians had thousands of emails related to former State Secretary Hillary Clinton that contained information damaging to her, according to what Papadopoulos told the FBI. Mifsud has denied to the FBI ever saying that.

The Mueller report claims that the FBI’s learning some variation of this information, combined with Wikileaks’ release of emails stolen from the Democratic National Committee, prompted the bureau to launch the Russia investigation on July 31, 2016.

“If Mifsud has extensive, suspicious contacts among Russian officials … then an incredibly wide range of Western institutions and individuals may have been compromised by him,” said Rep. Devin Nunes (R-Calif.) in a May 3 letter to the heads of the FBI, CIA, NSA, and the State Department.

Link supposedly cut ties with Mifsud after his conversations with Papadopoulos came out in late 2017.

But Mifsud was still living in Rome until May 2018 in an apartment apparently provided by Link Campus, according to an April 18 report by Italian list Il Foglio.