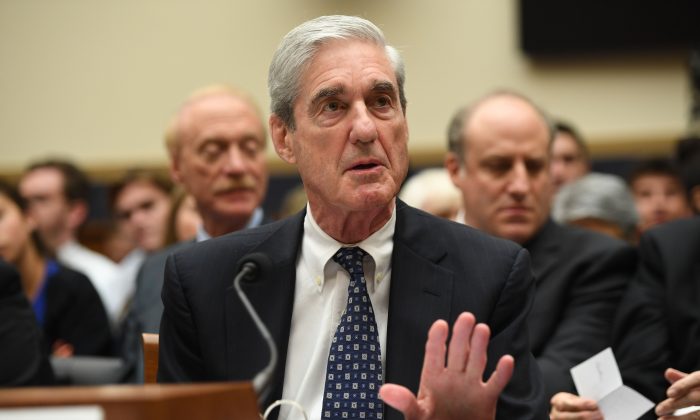 Former special counsel Robert Mueller was unable to name another instance when prosecutors said they didn’t exonerate someone they probed.

Appearing before House lawmakers on July 24, Mueller was asked by Rep. John Ratcliffe (R-Texas) for an example other than President Donald Trump “where the Justice Department determined that an investigated person was not exonerated because their innocence was not conclusively determined.”

“I cannot, but this was a unique situation,” Mueller responded.

“You can’t find it, because I’ll tell you why—it doesn’t exist. The special counsel’s job, nowhere does it say that you were to conclusively determine Donald Trump’s innocence or that the special counsel report should determine whether or not to exonerate him,” Ratcliffe said.

“Nowhere do those words appear together because, respectfully—respectfully, director—it was not the special counsel’s job to conclusively determine Donald Trump’s innocence or to exonerate him, because the bedrock principle of our justice system is a presumption of innocence.

“It exists for everyone, everyone is entitled to it, including sitting presidents. And because there is a presumption of innocence, prosecutors never, ever need to conclusively determine it,” Ratcliffe added.

A video of the exchange was shared by the Trump War Room Twitter account, managed by Trump’s 2020 campaign, which said the exchange highlighted the “RIGGED WITCH HUNT!”

WATCH: Robert Mueller says he can not name a single other example where investigators treated someone the way he treated @realdonaldtrump. RIGGED WITCH HUNT! pic.twitter.com/irCitjO6ps

Ratcliffe was referring to the special counsel team’s unusual decision to state in the report that the president wasn’t exonerated, even though the team didn’t recommend prosecution.

“If we had confidence after a thorough investigation of the facts that the President clearly did not commit obstruction of justice, we would so state. Based on the facts and the applicable legal standards, however, we are unable to reach that judgment,” the team wrote in the introduction to Volume II, which focused on possible obstruction of justice.

“The evidence we obtained about the President’s actions and intent presents difficult issues that prevent us from conclusively determining that no criminal conduct occurred. Accordingly, while this report does not conclude that the President committed a crime, it also does not exonerate him.”

Attorney General William Barr has noted the unusual nature of the determination, saying the special counsel’s analysis “did not reflect the views” of the Department of Justice.

Barr and Deputy Attorney General Rod Rosenstein, who appointed Mueller, reviewed the obstruction case that Mueller outlined after the special counsel declined to make a traditional prosecutorial determination. They said there wasn’t enough evidence for an obstruction of justice case.

The determination that Mueller’s team didn’t exonerate Trump “is not the standard we use at the department,” Barr said.

“We have to determine whether there is clear violation of the law and so, we applied the standards we would normally apply. We analyzed the law and the facts and a group of us spent a lot of time doing that and determined that both as a matter of law, many of the instances would not amount to obstruction,” Barr said.

The attorney general also said Mueller’s team seemed to misunderstand whether it could rule that Trump did commit obstruction.

“I personally felt he could’ve reached a decision,” Barr said during an interview with CBS on May 30. Barr said Mueller “had his reasons” for not making a recommendation, but declined to explain, adding: ‘”I’m not going to, you know, argue about those reasons.”

“The opinion says you cannot indict a president while he is in office, but he could’ve reached a decision as to whether it was criminal activity,” Barr said.