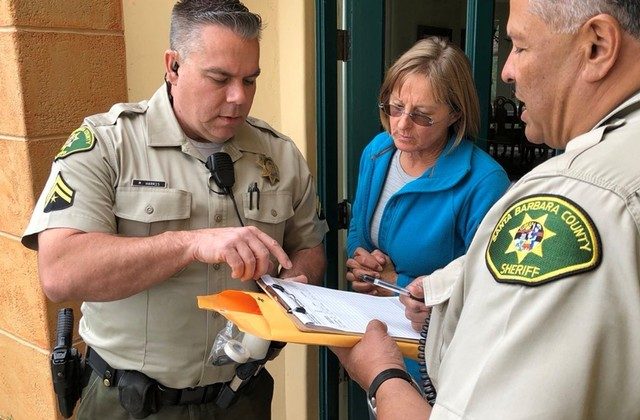 The evacuation was put into effect in the same general area where torrential rains on Jan. 9 unleashed cascades of mud, boulders and other debris that killed 21 people, injured dozens of others and damaged or destroyed hundreds of homes.

The bulk of the devastation occurred in the affluent hillside community of Montecito, 85 miles (137 km) northwest of Los Angeles, in a region where vast swaths of the coastal landscape were stripped of vegetation by huge wildfires in December.

Thursday’s mandatory evacuation, upgraded from a warning the day before, also covered parts of the neighboring city of Santa Barbara and the communities of Goleta, Carpinteria and Summerland, said Amber Anderson, a spokeswoman for incident managers.

At least half an inch (1.3 cm) of rain an hour is expected to fall over the region at the peak of the latest storm, running from about 2 a.m. through 8 a.m. on Friday, although showers are forecast to continue through Saturday, she said.

That level of rainfall would amount to about a third of the intensity of January’s downpours, but still exceed the capacity of the region’s catchment and drainage systems for controlling flash floods, she said.

The evacuation orders require affected residents to be out of their homes by 6 p.m. on Thursday. Those failing to heed the order are advised they are responsible for their own well-being for the duration of the evacuation.

An American Red Cross emergency shelter was opened at Santa Barbara’s fairgrounds for anyone with no place to go.

Santa Barbara County Sheriff’s deputies were out in force to assist in the evacuation, Anderson said.

Montecito is home to a number of celebrities, including Oprah Winfrey and Ellen DeGeneres.