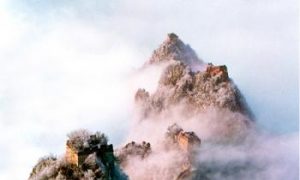 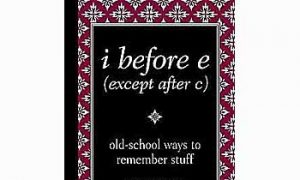 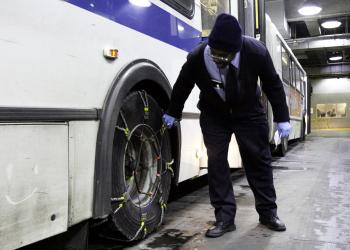 FINAL CHECK: MTA Bus driver David Kemp does a final check of his bus before it hits the road Tuesday. Up to 12 inches of snow have been predicted. (Phoebe Zheng/The Epoch Times)
US

MTA on High Alert, Promises ‘Nimbler’ Response to Next Snowstorm

By Tara MacIsaac
Print
NEW YORK—With 6-12 inches of snowfall predicted for Tuesday night, Metropolitan Transit Authority (MTA) Chairman and CEO Jay Walder, held a press conference Tuesday afternoon to address what was lacking in the day after Christmas blizzard response and what riders can expect this time around.

The MTA says that the likelihood of delays and cancellations will be greatly reduced by extra staff, better monitoring, and clearer communications internally and with customers. At the same time, Walder warns that “providing service during winter storms is always fraught with difficulty,” and people should only travel if necessary.

All MTA agencies are on their highest level of alert. Paratransit will only offer vital services. Walder encourages riders to check the MTA website for updates before traveling. Trains will continue running as much as possible, as they help keep snow off the track. The problem comes, explained LIRR President Helena Williams, when the snowfall reaches about a foot. If the third rail is covered, the electric-powered locomotives cannot run.

In December's storm, about 600 buses were stuck, and dozens of passengers were stranded overnight after LIRR failures in Jamaica, Queens. NYC Transit President Thomas Prendergast explained that with such a vast network, and so much happening during a storm, sometimes it is hard to manage. The MTA will have more people monitoring stuck trains and buses and making sure action is taken; a sort of stranded passenger advocacy team will be in place with each member responsible for a given area.

Williams reported that 50 additional employees will be watching the key LIRR switches in Jamaica that malfunctioned in December. She also noted that the LIRR system used at stations to communicate schedule information to passengers “is not a nimble system.” When they tried to load revised schedules in December, it overloaded and crashed. When it came back online, it was showing normal service. This time, she promises, at the very least the system will tell riders to check the Internet rather than give misinformation.

Subway conductors are equipped with cell phones in case of emergency. Communication on the buses has not changed, however. The radios failed for three hours during the December blizzard, said head of Bus Divisions Darryl Irick. He noted that they are “getting to the bottom of it,” but that the technology has not changed.

About 1,000 buses, 18 percent of MTA’s fleet, will have chained tires. This includes all buses on duty Tuesday night as well as 20 standby buses. Some drivers complained that the new hybrid buses were more likely to get stuck because of smaller wheels. Irick dismissed the claim, stating, “The whole gamut of our fleet got stuck, not just hybrid buses.”

Some MTA employees said they were told not to talk to the media. MTA riders, however, had lots to say.

“I just don’t trust them [MTA],” declared Hugh Mulholland, who is unhappy about service disruptions to his home in Bay Ridge even in fair weather. “They don’t perform.”

Barbara Nowak, also a Bay Ridge resident, decided to call it an early day and headed home to Brooklyn around 2 p.m.

“I anticipate the buses will be either delayed or stopped. We didn’t get service back until Thursday [after the last storm],” said Nowak. She said she fell repeatedly while walking to the train station after the storm.

Julius Bowens of Staten Island said he hopes the buses are on schedule. Though he was unhappy about waiting two hours for a bus that never came after the December storm, he wasn't too disappointed about going back to bed instead of work that day.

City Council will conduct a full review of MTA's post-blizzard 2010 response on Friday.

Mayor Bloomberg personally conveyed the forecast in a press conference Tuesday. He assured the public the changes announced in his office’s 15-point action plan released on Monday will be in force, though he noted not all changes could be enacted in such a short time.

"For nine years, 70 odd snow storms—things worked very well," the mayor reminded New Yorkers. He apologized for the insufficient response in December, but said they would handle things better in the future.

"I apologize. It was not done deliberately, and what we have to do is not look back, we have to learn and go forward, and that’s what we’re going to do,” said Bloomberg. His plans for Tuesday night involved making sure things were in place, keeping an eye on the weather, and taking in a Ranger's game. He said he was not worried about the snow until about midnight, when it was expected to be heavier.

He urged New Yorkers to stay off the roads if possible and to only call 911 in case of emergency.

The mayor's office also issued an Emergency Weather Declaration on Tuesday afternoon. City Council criticized the Bloomberg administration in a hearing Monday for not calling a snow emergency on Dec. 26. Deputy Mayor for Operations, Stephen Goldsmith, explained that in a snow emergency, cars must be moved from snow routes. City officials worried so many cars on the road in search of new parking spots would lead to more problems. The Emergency Weather Declaration, however, does not require drivers to move their cars. The following notices accompanied the declaration:

The public is urged to avoid all unnecessary driving during the duration of the storm and until further directed, and to use public transportation wherever possible. If you must drive, use extreme caution. Information about any service changes to public transportation is available on the MTA website at http://www.mta.info/.

Any vehicle found to be blocking roadways or impeding the ability to plow streets will be subject to towing at the owner’s expense.

The Emergency Management, Fire, Police, Sanitation, and Transportation commissioners will be taking all appropriate and necessary steps to preserve public safety and render all required and available assistance to protect the security, well-being, and health of the residents of the city.