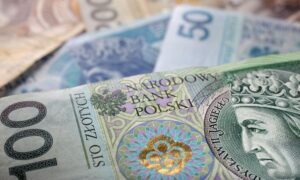 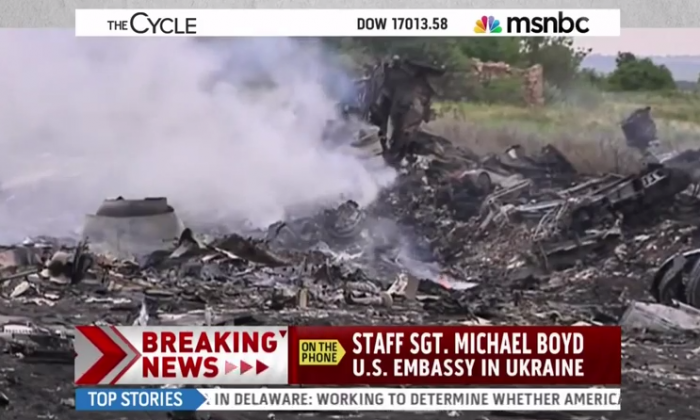 MSNBC host Krystal Ball was on the receiving end of a bad prank call during a television coverage of the downed Malaysia Airlines plane on Thursday.

During MSNBC’s The Cycle spot on the ill-fated Malaysia Airlines MH17 crash, a prank caller going by the name of “Staff Sgt. Michael Boyd.” gave his opinion of what he supposedly saw from the crash site.

“Well, I was looking out the window and I saw a projectile flying through the sky, and it would appear that the plane was shot down by a blast of wind from Howard Stern’s [expletive],” the caller said.

Ball continued to ask Boyd for more details given his “military training ,” following which the caller crudely mocked the host before hanging up.

See a video of the incident below.

Here is an Associated Press story about the plane crash.

WASHINGTON (AP) — American intelligence authorities believe a surface-to-air missile took down a passenger jet in eastern Ukraine on Thursday, a U.S. official said, but the Obama administration was still scrambling to confirm who launched the strike and whether there were American citizens killed in the crash.

Vice President Joe Biden said the incident was “not an accident” and described the Malaysia Airlines plane as having been “blown out of the sky.”

Among the unanswered questions was whether the missile was launched from the Russian or Ukrainian side of the border they share, according to the official, who was not authorized to discuss the matter publicly by name and insisted on anonymity.

The U.S. has sophisticated technologies that can detect missile launches, including the identification of heat from a rocket engine.

President Barack Obama, speaking during a trip to Delaware, made no mention of who might be responsible for the crash of the plane carrying 295 people, and called the incident a “terrible tragedy.”

Following the crash, the Federal Aviation Administration said U.S. airlines voluntarily agreed not to operate near the Ukraine-Russia border. The agency said it was monitoring the situation to determine whether further guidance was necessary.

The incident came one day after Obama levied broad economic sanctions on Russia as punishment for its threatening moves in Ukraine. Moscow is widely believed to be supporting pro-Russian separatists fomenting instability near the border, though the Kremlin denies those assertions.

Obama discussed the new sanctions by phone Thursday with Russian President Vladimir Putin. The White House said reports of the downed plane surfaced during that call and Putin mentioned the incident to his American counterpart.

Speaking later during a trip to Delaware, Obama said “the world is watching” the deadly incident.

“It looks like it might be a terrible tragedy,” he said. “Right now we’re working to determine whether there were American citizens on board. That is our first priority.”

White House officials said Obama still planned to go ahead with an evening of fundraising in New York.

Officials said Obama called both Ukrainian President Petro Poroshenko and Malaysian Prime Minister Najib Razak from Air Force One as he traveled to the events. The White House said Obama and Poroshenko agreed that all evidence from the crash site must remain in Ukraine until international investigators were able to examine it.

The U.S. planned to send a team of experts to Ukraine to assist with the investigation.

U.S. officials said Russia has sent a wide range of heavy weaponry into eastern Ukraine in recent months, although it is uncertain whether that includes the Buk air defense system, which is operated by a tracked vehicle. The U.S. suspects that Russian shoulder-fired anti-aircraft weapons have been provided to the separatists.

According to a Ukrainian state-owned import-export firm that specializes in military technology and weaponry, known as Ukroboronservice, the Ukrainian military operates the Buk-M1 system, which is designated by NATO as the SA-11 Gadfly. It is designed to shoot down military aircraft, including helicopters, as well as cruise missiles.

The Russians also are believed by U.S. officials to have provided the separatists in eastern Ukraine with other heavy weaponry such as artillery, multiple-launch rocket systems, tanks and armored personnel carriers.

The Federal Aviation Administration had previously warned U.S. pilots earlier this year not to fly over portions of the Ukraine in the Crimea region, according to notices posted on the agency’s website.