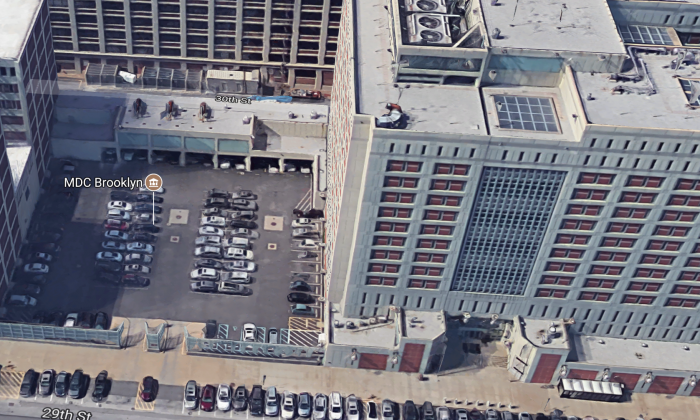 Aerial view of the Metropolitan Detention Center in Brooklyn. (Screenshot via Google Map)
Crime and Incidents

A violent MS-13 gang member allegedly beat up a fellow inmate at a New York prison in Sunset Park, Brooklyn, while prison staff watched the attack.

Rafael Lopez, the victim of the alleged brutal beating, said that his ribs were broken and his kidney lacerated when the inmate clubbed him with a sock full of padlocks, according to a Brooklyn federal lawsuit obtained by the New York Daily News.

Metropolitan Detention Center authorities knew before the attack that Douglas (Unico) Mendoza, who allegedly beat Lopez up, was an infamous and feared inmate with mental problems, Lopez said in the lawsuit, filed on Monday, Nov. 6.

The incident, which took place in September 2016, happened while Lopez, 53, was watching a baseball game with other inmates. Mendoza—who was in prison on a 2010 murder charge—allegedly flipped the channel to something else as a power grab.

Another inmate flipped the channel back to the game, which resulted in a quick argument before everyone calmed down, the Daily News reported.

Mendoza, 24 retreated but soon came back from his cell holding his makeshift weapon. Mendoza then  beat up Lopez, the lawsuit alleges.

According to the suit, two officers who were in the dorm area did not immediately try to stop the attack, but instead let officers in riot gear intervene.

Lopez said the prison didn’t know how to protect him, so they placed him in a special housing area for three months before transferring him to another federal jail in Manhattan, the Daily News reported.

As of writing, Lopez, who was charged with drug distribution conspiracy, is still at that same prison.

Lopez said the slow reaction was not the only problem. Other inmates had complained to prison staff that Mendoza was armed and dangerous, but no action was taken, he claimed.

A year before the assault, a judge recognized that Mendoza had issues, saying the man was “making motions with his body, which are not normal,” the Daily News reported. Judge Leonard Wexler also said Mendoza had a “faraway look in his eyes.”

Lopez said Mendoza did undergo a psychiatric exam, but was never given medication.

The case is still pending.