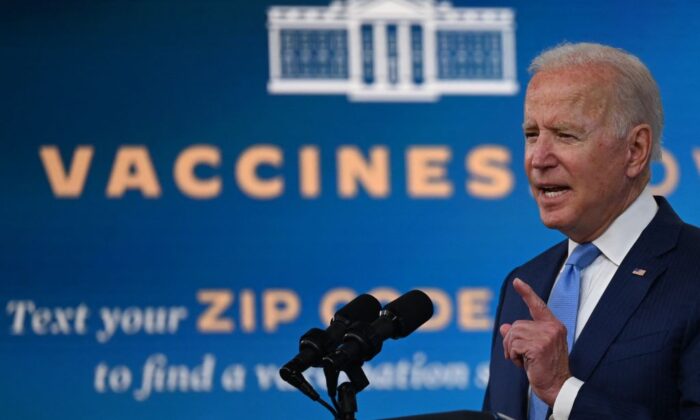 President Joe Biden delivers remarks on the COVID-19 response and the vaccination program at the White House, on Aug. 23, 2021. (Jim Watson/AFP via Getty Images)
Viewpoints

President Biden, the Constitution you swore on the Bible to “preserve, protect, and defend” gives you very limited authority. You are not a dictator.

That Constitution was ratified only because it sharply restricted federal authority. Its promoters reassured the public again and again that the Constitution enumerated (listed) federal powers—and that if a power isn’t on the list, it isn’t there.

The Constitution’s supporters even agreed to amendments reinforcing this point. The Ninth Amendment (whose language is widely misunderstood today) says that the Constitution’s specific limits on federal authority (such as the First Amendment), merely supplement the document’s other limits (such as the limits inherent in enumerated powers). The 10th Amendment says that federal functionaries like yourself have only those powers the Constitution enumerates. The rest are divided between the states and the people, with the specific lines of division varying in each state under its state constitution.

Now, Mr. President, let’s see what authority you do have. Pull out that pocket Constitution and examine it. The principal list of your powers is in Article II, Sections 2 and 3. There are a few others (like the presidential veto) in other places. Read the Constitution through, and you will find nothing—nothing—remotely resembling presidential authority to impose a vaccination mandate.

You might respond that your mandate merely enforces congressional laws, and that you are just exercising the discretion given you by Congress. But return to that pocket Constitution and examine the powers granted to Congress. The longest list is in Article I, Section 8, but there are others scattered throughout the document.

You will find that Congress may legislate for the District of Columbia, other duly-created federal enclaves, and the federal territories. You may impose your vaccination mandate there. But within state boundaries, Congress has nothing remotely resembling that authority.

Mr. President, some of your toadies might direct your attention to the Preamble and Article I, Section 8, Clause 1, both of which refer to the “general Welfare.” But as the Supreme Court has recognized (pdf), the Preamble is a statement of general purpose, not a source of constitutional rules. Article I, Section 8, Clause 1 grants Congress the power to tax, and the “general Welfare” language is designed merely to circumscribe the kinds of taxes it can impose. Nothing there authorizes a vaccination mandate.

What of Article I, Section 8, Clause 18? It says Congress may “make all Laws which shall be necessary and proper for carrying into Execution the foregoing Powers, and all other Powers vested by this Constitution in the Government of the United States, or in any Department or Officer thereof.” That doesn’t help, either. As some Founders stressed—and as Chief Justice John Roberts acknowledged in National Federation of Independent Business v. Sebelius (pdf) (the first Obamacare case)—the necessary and proper clause merely clarifies that Congress may adopt “incidental” means for carrying out enumerated powers. For example, Congress may set packaging standards as part of its power to “regulate Commerce among the several States.”

But it doesn’t enable Congress, or you, to dictate health decisions to your fellow Americans.

At Syracuse University College of Law, the professors probably taught you the modern Supreme Court has—in defiance of the Constitution you swore to uphold—enormously expanded the Commerce Power. (By “Commerce Power,” I mean the authority granted by the Constitution’s commerce clause in conjunction with its necessary and proper clause). The court now claims a congressional measure is “necessary and proper” if it “regulates an economic activity that substantially affects interstate commerce.”

And, yes, vaccinations, like everything else, affect interstate commerce. But re-read the court’s legal standard: For the federal government to regulate an activity under the Commerce Power, the activity must be economic in nature.

For example, the 1992 Supreme Court decision in United States v. Lopez (pdf) ruled that merely possessing a gun wasn’t an “economic activity,” so Congress couldn’t control possession of a firearm under the guise of regulating commerce. Similarly, the Sebelius case held that, while purchasing health insurance is an economic activity, refusing to purchase health insurance is not.

If refusing to enter an economic transaction isn’t economic, then abstaining from a non-economic activity (getting vaccinated) certainly isn’t economic! In other words, Mr. President, you can’t justify a vaccination mandate even under the modern court’s expansion of the Commerce Power.

Mr. President, I know that when you were in law school, you read the opinions of the greatest of all chief justices, John Marshall. Remember what they told you then: Chief Justice Marshall was no right-wing, states-rights, don’t-tread-on-me, Fox News-watching, Proud Boy, anti-vax, insurrectionist freak. He was an advocate of a strong federal government. He was central to establishing that government on a firm basis.

You may recall reading Marshall’s famous opinion in Gibbons v. Ogden (1824). You may recall how your constitutional law professor told you that the case established a liberal interpretation of Congress’s Commerce Power. Your professor might have added that when, in 1942, the World War II-era Supreme Court adopted the very liberal “substantially affect” standard, the justices relied specifically on Gibbons v. Odgen (pdf).

But, Mr. President, there is one part of Marshall’s opinion you might never have read. That’s because liberal case book authors and other law professors sometimes omit it, so students don’t see it. That part of the opinion identifies activities over which the federal government has no jurisdiction:

“Inspection laws … form a portion of that immense mass of legislation, which embraces every thing within the territory of a State, not surrendered to the general government: all which can be most advantageously exercised by the States themselves. Inspection laws, quarantine laws, health laws of every description, as well as laws for regulating the internal commerce of a State, and those which respect turnpike roads, ferries, &c., are component parts of this mass. No direct general power over these objects is granted to Congress; and, consequently, they remain subject to State legislation.”

There is no Supreme Court authority higher than Marshall, and he himself told us that “health laws of every description” are matters for determination by the states. Not by Congress, Mr. President. And not by you.

Yes, I’m aware of the pretext your administration has invented—that this mandate is just a business regulation. But this is unworthy of you, Mr. President. And if you persist, you will learn that is bad politics and bad law. The American people don’t like to be pushed around or lied to, and the courts aren’t fooled by pretexts.

Do the right thing on the vaccination mandate, Mr. President. Pull the plug.

Robert G. Natelson, a former constitutional law professor, is senior fellow in constitutional jurisprudence at the Independence Institute in Denver, and a senior adviser to the Convention of States movement. His research articles on the Constitution’s meaning have been cited repeatedly by justices and parties in the Supreme Court. He is the author of “The Original Constitution: What It Actually Said and Meant” (3rd ed., 2015).