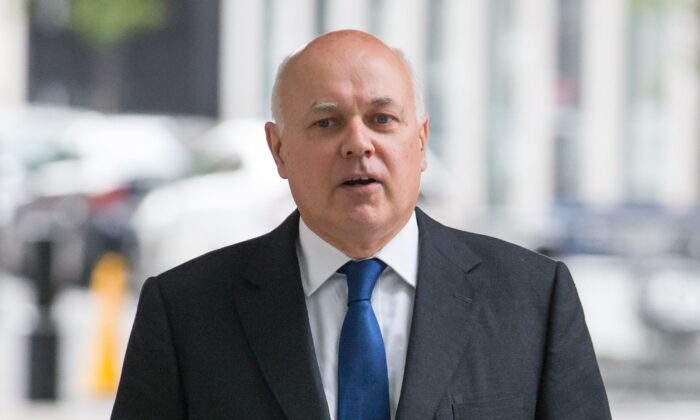 UK Parliament on Thursday urged the government to ramp up sanctions against those who are accused of human rights abuses and corruption in China and beyond, at least those who are on the United States sanctions list.

Moving the motion for Parliament to consider sanctions, former Conservative Party leader Sir Iain Duncan Smith said the UK had made 102 sanctions during the first year after it introduced the Magnitsky-style Global Human Rights Sanctions Regulations, but only six in the second year.

He also said the UK has failed to keep pace with its allies, particularly the United States, having sanctioned only 20 percent of the perpetrators sanctioned across the pond.

“That is inexplicable. I have no idea what the [United States] knows that we do not know and why it can act faster and more heavily than we can. We are allowing those sanctioned by the [United States] and other jurisdictions to use the UK as a haven to enjoy much of their ill-gotten gains,” Duncan Smith said.

The United States currently has 415 active sanctions under its Global Magnitsky Sanctions against 181 individuals and 234 entities. In comparison, The UK’s global human rights sanctions list included 75 individuals and six entities, 81 in total.

This includes 14 Chinese individuals and organisations sanctioned by the United States. Nine of them are not on the UK’s sanctions list, including Chen Quanguo, former Xinjiang Chinese Communist Party (CCP) secretary, Xinjiang Public Security Bureau, and other senior officials in the bureau.

Chen was described by a government minister as “a leading architect of the crackdown on the Uyghurs and other ethnic minorities” as early as January 2019.

Since the introduction of the new sanctions regime in July 2020, lawmakers have repeatedly called for sanctions against Chen, as well as former Chief Executive of Hong Kong Carrie Lam.

Under a separate regime, the United States sanctioned 42 individuals over the erosion of freedom and human rights in Hong Kong, including Lam, other Hong Kong government officials, vice-chairs of the 13th National People’s Congress Standing Committee—the rubber stamp body that passed the draconian Hong Kong national security law, and deputy directors of the Chinese regime’s Liaison Office in Hong Kong.

None of these people is sanctioned by the UK.

“What is going on?” Duncan Smith questioned the sanctions minister Rehman Chishti, adding, “there is no dodging this.”

Duncan Smith said the UK, being one of the signatories of the Sino-British Joint Declaration, has “a unique responsibility” with regard to Hong Kong, a former British colony.

“How many times have we called for the sanctioning of Carrie Lam—sanctioned by the United States and not by us, and we’re the country that has the closest relationship with Hong Kong.”

“They have been violated in the worst ways and are allegedly the main victims of forced organ harvesting in China,” she said, referring to the findings of an independent tribunal.

Nazanin Zaghari-Radcliffe and Anoosheh Ashoori, who both hold British and Iranian citizenship, were allowed to return to the UK earlier this year after years of detention in Iran, after the UK agreed to pay a £400 million ($523 million) debt dating back to the 1970s.

Naming Iranian state media reporter Ameneh Sadat Zabihpour and Hossein Taeb, the former head of the intelligence operation of the Islamic Revolutionary Guard Corps, Bryant argued if the government sanctioned the individuals when MPs called for it last year, “they might have thought twice about continuing to abuse British hostages today.”

Bryant said the UK “lagging behind others” in sanctions also gives the targets a window to move their assets, citing the example of Russian billionaire Vladimir Yevtushenkov, who gave part of his share in Sistema to his son after Britain imposed sanctions over Russia’s war in Ukraine.

MPs also urged the government to seize assets from sanctioned Russians instead of freezing them, and use the assets to “finance reparations for the victims of Putin’s brutal invasion of Ukraine.”

Duncan Smith urged the government to use the summer recess to “get this sorted out and to come back with a list of all the people they will sanction just to get us level with the [Unites States],” if not more.

Responding to the calls, Chishti, who has been appointed the sanctions minister two weeks ago, said he will speak to his U.S. counterparts during a visit next week, “looking at sanctions and how we can work together even more in the coming months and years.”

Chishti told MPs that the government continues to “challenge China for breaching its legally binding commitments under the Joint Declaration.”

The minister told MPs that the government will work with MPs and do “all we can to ensure that those who are serious human rights violators are brought to account.”