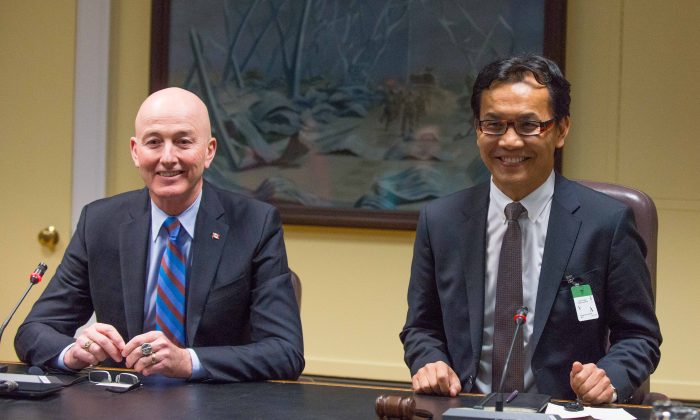 While the media were asked to leave the meeting, MPs made their views on the issue public that afternoon in statements in the House of Commons.

Sweet, who attended the meeting with Aukatsang, raised the issue of monks setting themselves on fire as a last, desperate form of protest.

“Imagine what it must take to set oneself on fire as a means of protest,” he said.

“The circumstances are clearly getting worse, but we do not hear much about it because journalists are prevented from reporting from the Tibetan areas in China.”

Sweet said Aukatsang, who is also part of the Central Tibetan Administration, updated MPs on developments in Tibet. He said the Dalai Lama continues to call for peace and dialogue with Chinese authorities.

Liberal MP Irwin Cotler said the fact that over 120 Tibetans have self-immolated is the ultimate cry of protest.

Tibetans’ non-violent pursuit of genuine autonomy, promised under the Chinese constitution, has been met with brutality, said Cotler.

“While Chinese President, Xi Jinping speaks of transparency and the rule of law, the repression of political dissent, the silencing of independent media, and the criminalization of innocent Tibetans [has] intensified.”

Beyond condoning cultural oppression in China, the MPs welcomed Tibetans resettled in Canada through the Tibetan Resettlement Project.

Nash, however, was critical of the government for delays reuniting resettled Tibetans with loved ones, and blamed an inefficient immigration system.

Sweet, Nash, and Cotler are members of the Parliamentary Friends of Tibet, a parliamentary group that works to raise awareness of the plight of Tibetans.