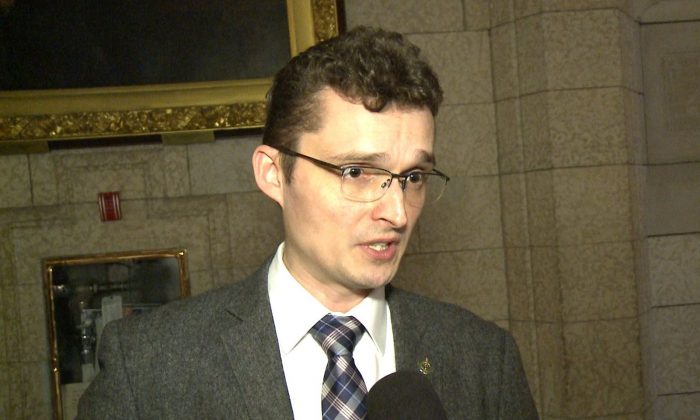 Conservative MP Tom Kmiec talks to NTD Televisions inside Parliament in Ottawa on May 2, 2017. Kmiec presented a petition in the House calling for the release of Canadian citizen Sun Qian, who was detained in Beijing in early February. (NTD Television)
Canada

OTTAWA—A Calgary MP has presented a petition in the House of Commons calling for the release of Canadian citizen Sun Qian, who was detained in Beijing in early February.

On June 12, MP Tom Kmiec, the Conservative’s deputy foreign affairs critic, presented petitions he said were signed by over 200 of his constituents and others in Calgary.

“The petitioners remind the government of the illegal detention of Sun Qian,” Kmiec said, adding that there has been “no movement” on the part of the government to do more to secure Sun’s release.

Sun, who has been mistreated in the detention centre and is being held in a small, crowded cell with 11 other inmates, has received two consular visits since she was detained on Feb. 19.

In China, Sun’s 78-year-old mother, Li Yunxiu, is also trying to have her daughter freed from detention. Through the Falun Gong website Minghui.org, Li has called for Sun’s release and also urged the Canadian government to help her daughter. Li and other family members have not been allowed to visit Sun since her arrest.

However, Sun’s lawyer, Glen Gao, has been able to visit her a few times at the Bejing No. 1 Detention Centre. During his most recent visit, on May 27, Gao told Sun’s sister, Sun Zan, that after his previous visit, four male guards pushed Sun to the floor and sprayed her in the face with a foul-smelling liquid.

Sun has been mistreated in the detention centre and is being held in a small, crowded cell with 11 other inmates.

Then the guards handcuffed her to a steel chair and continued spraying her in the face. When the odour from the spray was so strong that guards were unable to bear it, they opened a window. They then covered Sun’s face with a mask so the pepper spray could be completely absorbed into her face, Sun Zan said.

From then on, Sun was handcuffed and shackled day and night until the consular visit on May 18.

The handcuffs were the kind with no chain between the cuffs, so there was no room for any movement. Yet every night there was someone assigned to roughly jerk the handcuffs and shackles every 30 minutes, which caused Sun unbearable pain, Sun Zan said.

When Gao visited Sun on May 27, he said he could clearly see the bruises and cuts on her wrists from the handcuffs.

As vice president of Beijing Leadman Biochemistry Co., 51-year-old Sun often travelled between her home in Vancouver and Beijing. After her arrest on Feb 19 for practising Falun Gong, authorities refused to tell her family where she was being detained, so her mother and sister went from one police station to another in an effort to discover her whereabouts.

After two weeks of searching, they finally found out Sun was being detained at the No. 1 Beijing Centre.

Meanwhile, in the House of Commons, Green party Leader Elizabeth May and some other MPs recently presented petitions calling for an end to the campaign of persecution being waged against Falun Gong practitioners in China.

On June 13,Liberal MP  Robert-Falcon Ouellette presented a petition in the House calling for the release of family members of Canadians detained in China for practising Falun Gong—11 in all—and for the end of the persecution.

“It has been 17 years since the Chinese communist regime launched the persecution to eradicate Falun Gong, a spiritual practice centred on the principles of truthfulness, compassion, and forbearance. Millions of Falun Gong practitioners have been arbitrarily detained, including family members of Canadians,” Ouellette said.

“Mass extrajudicial imprisonment, forced labour, torture, rape, and killing, along with hate propaganda, have all been reported by major human rights organizations,” he added, describing persecution launched by the Chinese regime against the traditional practice in 1999.