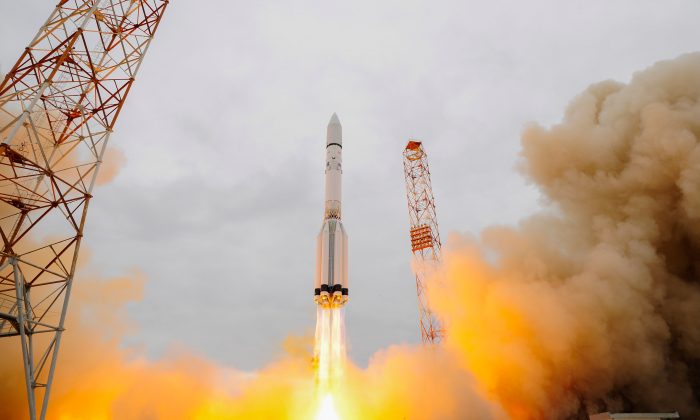 The ExoMars 2016 lifts off on a Proton-M rocket in Baikonur, Kazakhstan, on March 14, 2016. One of the scientific objectives of the collaboration between the European Space Agency and the Russian Federal Space Agency is to search for signs of past and present life on Mars. (Stephane Corvaja/ESA via Getty Images)
Space

Experts in space medicine from the Australian National University (ANU) have developed a mathematical model to evaluate the impact that space travel to Mars would have on the human body.

The lead author of the paper, Lex van Loon, a Research Fellow from the ANU Medical School, said in a news release that with the advent of space travel trips to Mars inspire many concerns on the health front due to the lengthy exposure to microgravity, often called “zero” gravity.

Van Loon said that prolonged time in zero gravity combined with subjection to the damaging radiation emitted by the Sun, has a potential to cause “fundamental” changes to the human body. An example of which is the changes to the human body’s blood vessel structure and reduction in heart muscles that occur when a person lives in zero-gravity for extended periods like a six to seven-month journey to Mars.

To investigate the changes, the researchers at ANU simulated the effect that prolonged exposure to zero gravity would have on the cardiovascular system —the heart, blood and blood vessels. This information then allowed them to generate the model, which the researchers foresee as being able to serve as an important tool in figuring out how to land people on the surface of Mars as it can be used to assess the effect that both short and long-duration space travel has on the human body.

Co-author Dr Emma Tucker, a medical doctor, astrophysicist and Research Fellow at ANU, said that in zero gravity, the heart becomes lazy because it doesn’t have to work as hard to pump blood around the body. In an environment with near no gravity, the heart does not have to overcome gravity to pump the blood up.

“When you’re on Earth, gravity is pulling fluid to the bottom half of our body, which is why some people find their legs begin to swell up toward the end of the day,” Tucker said.

“But when you go into space that gravitational pull disappears, which means the fluid shifts to the top half of your body, and that triggers a response that fools the body into thinking there’s too much fluid.”

“As a result, you start going to the toilet a lot, you start getting rid of extra fluid, you don’t feel thirsty, and you don’t drink as much, which means you become dehydrated in space.”

She said the effect of zero gravity is why astronauts are seen fainting on the news when they return to upright movement on Earth.

“This is quite a common occurrence as a result of space travel, and the longer you’re in space, the more likely you are to collapse when you return to gravity.

“The purpose of our model is to predict, with great accuracy, whether an astronaut can safely arrive on Mars without fainting. We believe it’s possible.”

Fainting Is a Critical Issue in Space Exploration

Astronauts must be able to perform their duties without immediate assistance from support crews, because there is a communication delay in relaying messages between Mars and Earth.

According to NASA, a radio signal from Mars normally takes around five to 20 minutes to reach Earth, depending on the position of the planets. Van Loon said that the duration of the delay is dependent on the planet’s alignment with the Sun.

The planets orbit the sun at different speeds, Earth completes one orbit in around 365 days, while Mars takes around 687 days, during this orbit the two planets move closer and further away from each other as they move around.

“If an astronaut faints when they first step out of the spacecraft or if there’s a medical emergency, they’ll be nobody on Mars to help them,” Van Loon said.

“This is why we must be absolutely certain the astronaut is fit to fly and can adapt to Mars’ gravitational field. They must be able to operate effectively and efficiently with minimal support during those crucial first few minutes.”

In an email to The Epoch Times, Van Loon said that fainting itself is not that problematic.

However, he said that because fainting causes falling, which increases the risk of unpredictable health issues, and because there is a complete absence of medical support, it is important to predict the degree to which an astronaut could lose consciousness.

“A validated clinical mathematical model was used as the base model,” Van Loon said.

“This base model is used extensively in (earth-based) medicine by medical doctors to simulate, predict and teach complex physiological processes.”

He said that to estimate the parameters of the model, data from NASA, which regarded astronauts that went to and from space, was used.

“Last, the model was validated against reported data of standing tests in astronauts.”

“The model is accurate for the requirements we set during the development. That is; cardiovascular physiology, performing a stand test, different levels of gravity, and space travel.”

“Obviously, this does not cover the entire scope of health-related issues that come with space travel (i.e. radiation and other organ systems).”

In 2019, researchers from the University of Texas Southwestern Medical Centre discovered that daily exercise could help to prevent the loss of heart muscle for astronauts in space.

“Multiple studies show that these exercise protocols are important countermeasures to keep the cardiovascular system in shape,” Van Loon said.

“Women turn out to be more precise in sticking to these kinds of protocols and therefore have less trouble returning to Earth. We did, for the Mars simulation, assumed the person to stick to a strict exercise protocol.”

Although the data used to establish the parameters of the model was collected from middle-aged and well-trained astronauts, the researchers intend to expand the model’s abilities to provide a more comprehensive picture of what space travel would do to the everyday person.

To accomplish this, they plan to simulate the impact that prolonged space travel would have on comparatively unhealthy people who have pre-existing heart conditions.

The team aims to address this situation by using the models to predict whether a person is healthy enough to travel to the Red Planet.