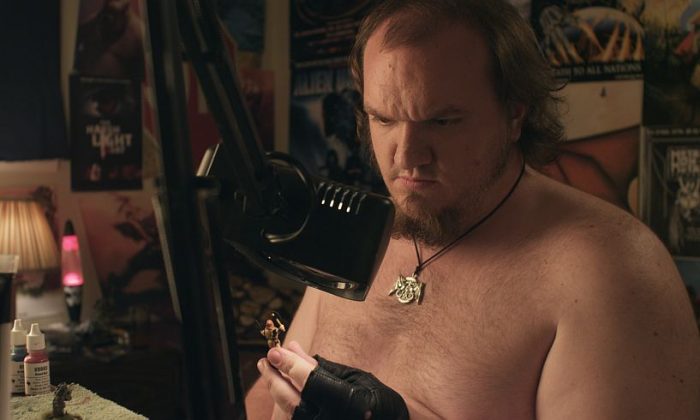 Scott Weidermeyer knows his exotic dice—good jobs and dating, not so much. He is a “Game Master,” the organizer of an epic fantasy role-playing game. It is one of the few sources of personal fulfillment in his life. Yet, even his gaming will turn sour in Katie Graham and Andrew Matthews’s “Zero Charisma,” which opens this Friday in New York.

Poor sad sack Weidermeyer is in for a miserable time of it. Living with his sharp-tongued grandmother, he only feels in control of his life when lording over his ostensible friends during their weekly game night.

Unfortunately, when one player drops out to get his act together, Weidermeyer has difficulty filling his chair. Eventually, Miles steps in, but he immediately rubs Weidermeyer the wrong way.

To a hardcore nerd like Weidermeyer, the newcomer is a hipster phony. His credentials as a writer for a “geek chic” website further fuels the Game Master’s suspicions. Success simply isn’t something he can relate to.

However, his fellow players quickly fall under the sway of Miles’s “gee whiz” charm. Just as Weidermeyer’s churlish behavior pushes away his friends, his estranged mother pays a visit, destabilizing his home life, such as it is.

The first film distributed by Nerdist Industries (in conjunction with Tribeca Film), “Zero” is billed as an ode to geekery. Maybe it is meant with love, but it is hard to tell from what transpires on-screen. Frankly, to judge from “Zero,” you would be better off with the filmmakers’ disdain rather than their affection.

The humiliations they rain down on their lead character-punching bag are truly cringe-worthy. Anyone with a moderately human capacity for empathy will find it a queasy viewing experience.

Nevertheless, Sam Eidson’s commitment is admirable. As Weidermeyer, he reaches a level of antisocial pathos rarely seen on film. Every audience wince is a tribute to his performance.

In fact, most of the cast is convincingly geeky, with Dakin Matthews stealing his scenes as celebrity game designer Greg Goran. Nevertheless, it is hard to figure who the presumed target market is for this exercise in nerd emotional torture.

Despite the earnestness of its ensemble cast (particularly Eidson), “Zero” feels surprisingly mean-spirited. Sure, Oprah-esque life lessons are learned, but we are always expected to laugh at rather than with its schlubby loser.

Not nearly as much fun as it could have been, “Zero Charisma” is rather disappointing overall. It opens this Friday, Oct. 11, in New York at the Cinema Village and next Friday, Oct. 18, in San Francisco at the Roxie.