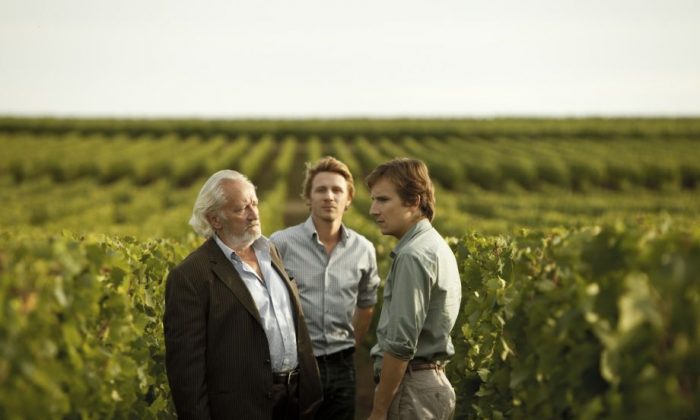 Paul de Marseul (L, played by Niels Arestrup) is a proprietor of a prestigious family wine estate with his son and heir Martin (R, played by Lorànt Deutsch) in the dramatic film “You Will Be My Son.” (Courtesy of Cohen Media Group)
Entertainment

Movie Review: ‘You Will Be My Son’

Nobody understands estate law like old French vintners, who feel duty-bound to maintain their chateaus and vineyards as an undivided whole. It is gravely serious business for Paul de Marseul to even consider cutting out his only son and presumed heir, but de Marseul has always been more interested in his next vintage than his flesh and blood. The scenery is lovely, but the paternal relations get ugly in Gilles Legrand’s “You Will Be My Son.”

Driven to maintain his elite reputation, Paul de Marseul has always been a shameless manipulator. Learning of his cellar-master François Amelot’s terminal cancer, he wastes no time finding someone to replace him during the harvest. It will not be his son Martin.

While de Marseul trusts his presumed successor with sales and marketing responsibilities, at least to an extent, he has no confidence in his son’s nose. He briefly allows the approval-craving Martin to audition for the gig, but it is only a cruel formality. It is clear that de Marseul père had already set his sights on Amelot’s son Philippe, who has recently resigned from Coppola’s vineyards to be near his ailing father.

When it comes to the harvest, the junior de Marseul can do no right and his childhood chum-turned-rival can do no wrong. However, old de Marseul’s unsubtle campaign to co-opt and perhaps even adopt his potential protégé deeply wounds the dying Amelot. Martin de Marseul is not very happy about it either.

There is absolutely no cheap sentiment on tap in “You Will Be My Son.” Sugar-coating nothing, Legrand stages one wince-inducing scene after another, almost to the point of emotional exhaustion. He stacks the deck so thoroughly against the pitiable Martin that viewers have to feel for the poor guy.

Niels Arestrup is a fine actor, perfectly cast as the senior de Marseul, but the character’s casual spitefulness is often rather jarring.

The first-rate ensemble will pull audiences in nonetheless, vividly conveying decades-old resentments and insecurities that toxically metastasize as a result of de Marseul’s plotting.

Lorànt Deutsch convincingly combines pathos and petulance as the spurned son, while Anne Marivin is a surprisingly strong presence as Alice, his fiercely loyal wife. Yet, as old Amelot, the veteran Patrick Chesnais stakes a claim to all the film’s quietly heavy moments.

An unusually elegant package, “You Will Be My Son” is further distinguished by Armand Amar’s elegiac classical soundtrack and Yves Angelo’s sweeping cinematography, which absolutely basks in the glorious Bordeaux vistas. Sensitively helmed by Legrand, the film’s tragedy approaches legitimately Shakespearean dimensions.