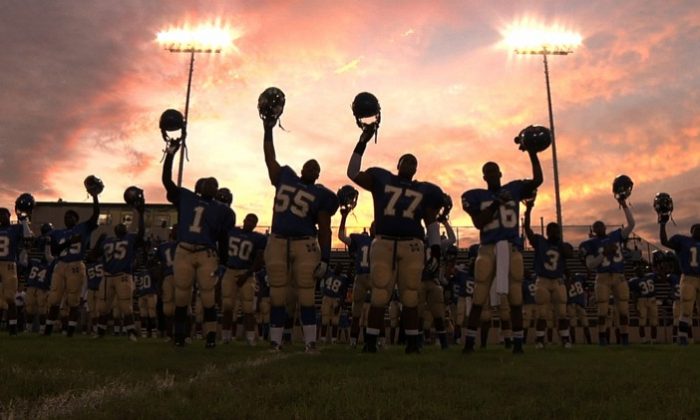 Why another rite-of-passage football movie? We’ve seen this story told a million times. Well, there are a million pizza joints in New York City—why open another one? If it’s a good one, people are simply going to go.

There are also only eight archetypal stories. Every story under the sun is a variation of one of these eight, and they are told over and over.

The story of “Undefeated” is a Cinderella story—unrecognized virtue at last recognized. This version is uncommonly well told.

“Undefeated” focuses on three players: big and talented O.C., undersized but over-achieving Montrail (“Money”), and anger-issue-having Chavis. The movie chronicles their struggles with each other, as well as with improving both academically and on the football field.

As an archetypal character in an archetypal tale, Money has a particularly compelling story. The groundbreaking sports documentary “Hoop Dreams” has one of these little guys who’s too small for the game but has a huge heart. So does “More Than a Game,” the film made about LeBron James’s high school basketball team. Of course, the king of this archetype is the 1993 football film “Rudy.”

The little men in big-man sports have to come to terms with the truth that what they love is just not going to be theirs in this lifetime. They have a choice of living their lives with wounded hearts and feeling that life is unfair, or letting go and moving on. Money moves on in a way that makes one believe in magic.

However, the true heart of the film is jovial, red-haired coach Bill. Not having grown up with a father of his own, he passionately gives every fiber of his soul to helping these African American boys, who are also missing fathers.

We watch the boys, under his patient tutelage, transform toward manhood. His philosophy is that character builds football prowess, but football does not necessarily build character. As proof of his emphasis on improving character, the team morphs into a powerhouse, and the wins increase dramatically.

Co-directors Dan Lindsay and T.J. Martin are top-rate filmmakers. Along with a third crewmember, they become such a constant fly-on-the-wall presence in the lives of the coaches and students that the team no longer notices them. This results in the non-actor film subjects being able to completely relax and be themselves on camera—which amounts to compelling acting. Actors spend years in acting class learning to relax on-camera and be “private in public.”

The highlight of “Undefeated” comes at the film’s climax, during the finale of the last game of the season. Coach Bill grabs O.C. in a massive bear hug, like father and son, tears flowing where they may. He delivers the archetypal verbal talisman that all young men need to hear from a male elder—the blessing. Never in a Cinderella-archetype story, at least in a documentary, has this been so movingly portrayed.

“Undefeated” is the story of unrecognized virtue at last recognized. O.C. gets recruited, and Coach Bill’s great heart of compassion, having been immortalized on film, is now turned toward his own children. To find out what happens to the rest—see this excellent film.