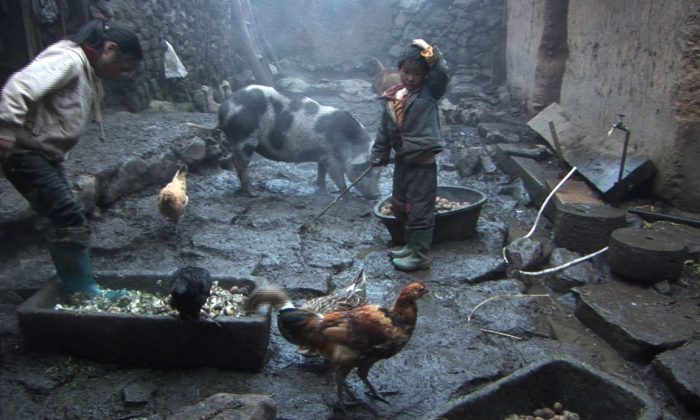 A peasant family is working in rural China in the documentary “Three Sisters.” (Courtesy of Canal180.pt)
Entertainment

The other China
By Joe Bendel

It looks like shepherding and dung collecting are the only forms of work available in tiny Xi Yang Tang Village. Yet, somehow 10-year-old Yingying seems to do more than her fair share. The eldest of three sisters, she very definitely lives in the Other China, far removed from go-go Shanghai and the meddling Communist Party policy makers.

As the eldest, Yingying naturally assumes responsibility for her younger siblings: 6-year-old Zhenzhen and 4-year-old Fenfen. Their mother deserted long ago and their father is often absent, fruitlessly looking for work in the nearest urban center. Aside from meals served by a resentful aunt, they practically live like Dickensian street urchins.

Eventually, Yingying’s grandfather asserts his patriarchal authority. Believing he has arranged work for his recently returned son, he decides that the two youngest will live with their father in the city and Yingying will live with him in the village. She will go to school, and he will pay her pocket money for her work in the fields.

Initially, this looks like a good opportunity for her, both in terms of socialization and future opportunities. However, it soon becomes clear that tending the flock takes precedence over her studies. The results are heartbreaking.

Frankly, she ought to be subject to child labor laws, but she lives in rural China. For obvious reasons, Wang never places political considerations front and center. Yet, the implications are conspicuously obvious and explicitly stated at the annual feast that Yingying attends with her grandfather.

It is there the village headman explains that the national authorities are intent on collecting the health insurance premiums they cannot afford. They are also determined to continue with euphemistically titled “rural development” programs to replace the villagers’ current mud-floored homes with prohibitively expensive new units. They’re from the Party—they’re here to help.

Audiences of “Three Sisters” are guaranteed to feel maddeningly helpless. Yingying is a good kid who deserves better than her lot in life, but what can viewers do? This is China, the so-called new global power. Nonetheless, Wang’s exposé of shocking rural inequality is thorough and compelling.

“Three Sisters” unquestionably serves as an indictment of the regime’s unfilled promises, but as a work of cinema it is profoundly intimate. Granted, patrons accustomed to multiplex fare will find the quiet pace and 2.5-hour running time challenging. Yet, the simple power of Yingying’s story ought to hit anyone of good conscience on a deeply human level.