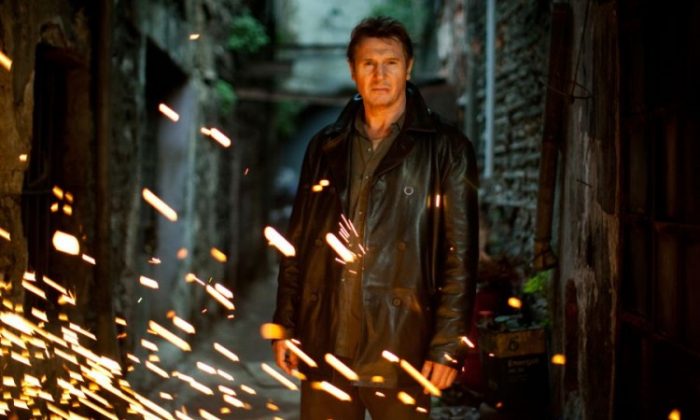 Lately, Facebook has been speeding up the famous-quip immortalization process; people post an endless stream of photo memes. A favorite is Lord of the Rings actor Sean Bean making an “O” with a cupped hand at eye level (for emphasis) and saying, “One does not simply walk into Mordor.”

Facebookers like to use the Sean Bean photo with other sentences, like, “One does not simply leave Bubble Wrap alone.”

This is a roundabout way of saying that the dismally titled Taken 2 could have been retitled (with “O” gesture) “One does not simply walk away from a hit film without attempting to drain some more dollars with a revenge sequel.”

Taken was about a trained assassin rescuing his daughter from Albanian sex traffickers.

Liam Neeson, star of both Taken movies, already had a famous quote from the original: “I will look for you, I will find you, and I will kill you.” Now things are reversed; here come the Albanians, and they’re quoting Liam’s line.

There’s a burial scene in Albania. The distraught father of the deceased, Murad (Rade Serbedzija), swears an oath. His son’s murderer must die. He who must die is of course Bryan Mills, former CIA operator (Neeson). Murad kidnaps Bryan and his wife (Famke Janssen) while they’re on vacation in Istanbul.

They try to nab daughter Kim (Maggie Grace) too, but even though Bryan’s trussed up in some dungeon, he manages to coach Kim on ninja evasion tactics by cell phone.

There’s some fun thrill-y, chase-y stuff, if laughable, but soon the tables are turned and Bryan’s back to the job he had in the first movie: looking for kidnappers, finding them, killing them.

The first film, Taken, got in our collective subconscious and did some damage because it’s an archetypal parental nightmare—a chaperoneless travel-vacationing young daughter and her girlfriend are “Taken” by sex traffickers. It had the perennially satisfying premise of a deadly agent saying, “You just messed with the wrong guy’s daughter.” It was comforting to know the obvious outcome at the outset, and anticipate the bad-guy beat-down.

The high point of Taken 2 is a scene where Kim sets off grenades so dad can aurally ascertain the distance of his dungeon from his daughter. Bryan breaks a steam pipe in the basement, and Kim has to locate that steam up on the rooftops and drop dad’s gun down the steam pipe. This is good Bourne Identity stuff, but Kim’s hysteria is not Jason Bourne’s coolness, so there was much derisive hooting at the screening.

Lots of time is dedicated to establishing Kim’s lack of a driver’s license, and yet there she is, doing Jason Bourne-type European narrow-street driving, all screeching tires and whatnot. A veritable no-license-having professional ninja driver, she is. More hooting.

This is a lazy, cynical film made for one reason only: to part you from your hard-earned cash. That all said, it holds one’s attention surprisingly well. One does not simply glance away from Taken 2. One should also not simply go to the theater and pay 13 bucks but should instead simply wait for it on DVD.