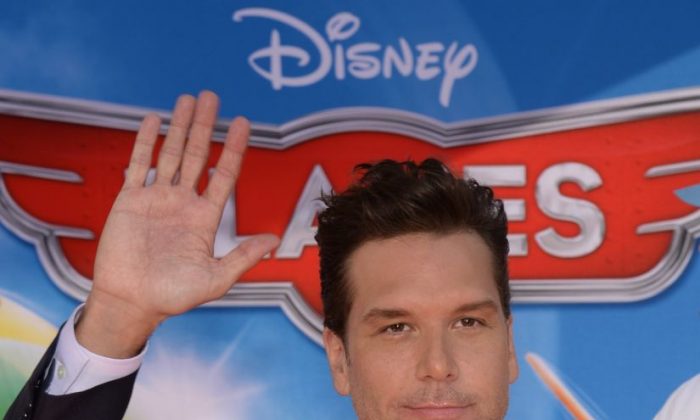 Actor Dane Cook at the premiere of "Planes" at the El Capitan Theatre on Aug. 5 in Hollywood, Calif. (Robyn Beck/AFP/Getty Images
Entertainment

In fact, big showbiz trusts heartland America’s love affair with all manner of vehicular machinery so much that it shamelessly copied “Cars” and labeled it “Planes.”

We all knew it was coming.

Showbiz should always correctly be called “Biz-show,” and “Planes” is “bizness” as usual. We don’t have crop-duster planes in New York City or L.A., but they’ve got ’em all over Arkansas, Kansas, and Kentucky. Ka-chow, Ka-ching!

Pop quiz: What do “Cars,” “Turbo,” and “Planes” all have in common? They’re all cartoons about racing.

Dusty Crophopper (voiced by Dane Cook) has a too-small-for-racing single propeller but a deep need for speed. Nice touch that in a movie about planes, the actor who co-coined the phrase “Need for speed” (Anthony Edwards in “Top Gun”) makes a cameo here.

Dusty does better than expected and gets some pointers from the stock, curmudgeonly mentor Skipper (Stacy Keach) to prepare him for the big time.

To qualify, Dusty has to go up against bad-boy P-51 Mustangs and Sea Furies! He loses, but lucks into the big air race because the fifth-place plane got caught for “performance-enhancing” plane fuel. Wink-wink.

Skipper realizes that Dusty’s a “flat-hatter” who hates heights. Likes to fly low. He’s going to have to eventually conquer that dragon.

His fellow racing-plane competition is a motley crew of stereotypes, which is the case with all these cartoon racing films. There are Mexican, British, German, and Indian planes, and so on, all stereotypically accented and affected.

Speaking of stereotypes and accents, it’s a bit of a shame that the other field-hand plane is voiced by Cedric the Entertainer, waxing poetic about the stanky “Vitaminamulch” he and Dusty spray the fields with. (Think about that. It’ll come to you.)

So anyway, RPX Ripslinger, the nasty, win-at-any-cost, quad-propeller, superstar plane, is the one to beat. And they’re off!

Along the way, Dusty gets seduced by a deceitful, curvaceous Indian plane and tricked into having to fly at a 45-degree angle through a train tunnel. But he’s a practiced flat-hatter—he’s got low-fly skills.

Ripslinger didn’t count on that!

Dusty’s a good plane; he puts others before himself. Though obviously unqualified, he’s quite virtuous. Therefore this race is his to win, and while Ripslinger tries to take away what is Dusty’s, in the end he cannot.

We all know this. Kids 4 years old won’t, so don’t tell them.

When, at a crucial juncture, Dusty’s down and out, those he’s helped come to his rescue with spare plane parts.

Like John Milner in “American Graffiti” taking the headers off his yellow deuce coupe to go up against that bad ’55 Chevy, Dusty removes his field sprayer to go head to head with Ripslinger!

“Planes” also has the same western red-rock buttes as “Cars,” but instead of being Cadillac tailfin shaped, they’re fuselage rear-stabilizer shaped.

Also photocopied from “Cars” is the tractors-as-cows running gag, accompanied here by a remark by the Indian plane about how tractors are sacred in her country.

Notice all the apocalyptic, dystopian movies coming out lately? Where humans trash the planet and go live elsewhere? “Planes” is apparently what goes on around here after humans leave. “Cars,” “Planes,” and “Wall-E” all stay behind and do human stuff.

This could start up a whole existential, cosmological, theological, even epistemological debate! Do these sentient cars and planes have spirits? If a plane accrues too much karma, will it reincarnate as a drone?

Perhaps this is a story about a dimension where all the inanimate things here have a sentient counterpart over there. Sort of like the scene in “Who Framed Roger Rabbit” where the alley garbage cans have slitty eyes and growly voices? Are all these cartoonists trying to tell us something?

Perhaps the best is yet to come! We’ve only just scratched the surface of America’s wheeled subcultures. Stay tuned for “Harleys,” “Mountain Bikes,” and “Skateboards.”

Meanwhile, “Planes” is one for the ages. Ages 4 through 7.