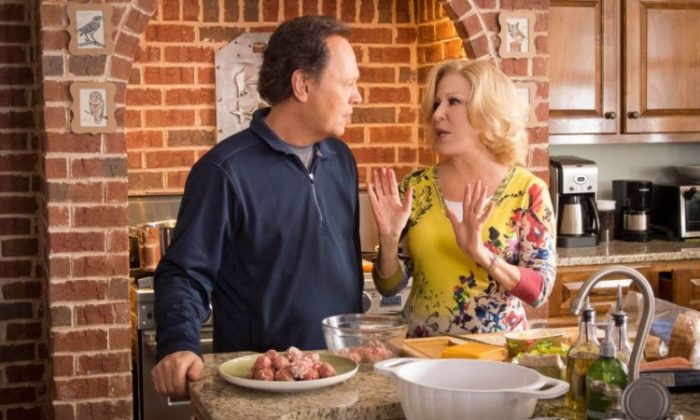 A more clichéd, cloying, and predictable treacle fest than Parental Guidance, you will not find. That is, if you’re an adult. That’s why it’s a pretty good film for small children!

He’s clearly very good at his job, but according to the front office—he’s ancient. He’s not hip, he doesn’t have a Facebook account, doesn’t know what an “app” is, or how to “tweet.” He gets fired.

He sadly goes home, where his wife (Bette Midler) is hosting a pole-dancing workout, which, in a child’s movie, feels like some kind of gratuitous naughtiness. They get a call from their daughter about watching the grandkids, whom they rarely get to see. They pack in a hurry.

Meanwhile, in the fully automated house of their daughter Alice (Marisa Tomei), where you talk to the house and it talks back (and secretly records everything you do), said daughter has been busy raising the kids in the currently popular manner.

Everything is highly “PC.” There are no boundaries, there’s no saying “no,” no competition, and no spanking. The kids have to “use their words.” Basically the parents spoil their kids rotten.

The grandparents and grandkids are reintroduced, whereupon the youngest grandchild, Barker, immediately adds an “f” to grandpa Artie’s name.

Artie shows the middle son how to stand up to bullies, and haggles with princeling Barker over the price of bribery to keep him from tattling on grandpa’s various mishaps.

There’s an over-the-top silly storyline in which Artie, desperate to get back to announcing work, sneaks Barker out with him to audition for the X Games. Grandpa pretends to be a third of his age and attempts to approximate X Games lingo, an amalgamation of hip-hop and surfer-speak.

While Artie’s embarrassing himself thusly, young Barker causes the great Tony Hawk to wipe out in the middle of a tricky maneuver on the half-pipe. It gets on the evening news. It is seen by Artie’s uptight daughter. Grandpa is busted.

The grandparents loosen the kids up and teach them how to have old-school fun. They play “kick the can” in a rainstorm, grandma helps prepare eldest daughter for her first date, the old couple do a Broadway-like rendition of the doo-wop song “Who wrote the Book of Love.”

Grandpa chases Barker around a packed symphony concert hall and apprehends the rascal right in front of the harried conductor, giving a speech on the benefits of spanking, which gets a standing ovation.

The children blossom under their grandparents’ old-school parenting, they put away some childish things, come to understandings, and make some momentous life decisions.

The whole thing has the feel of a community theater skit, with lots of borscht-belt jokes. It’s Billy Crystal and Bette Midler, after all. The soundtrack might have been lifted off any mid-1970s television sitcom.

Some parents will be surreptitiously texting, some sleeping, and some guffawing. Perhaps it’s not such a terrible spoiler to reveal that grandpa finds a new baseball announcer job—where the players are all about 4 feet tall.

Four stars for small children, minus one and a half stars for parents, equals: