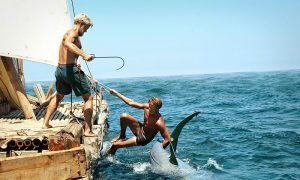 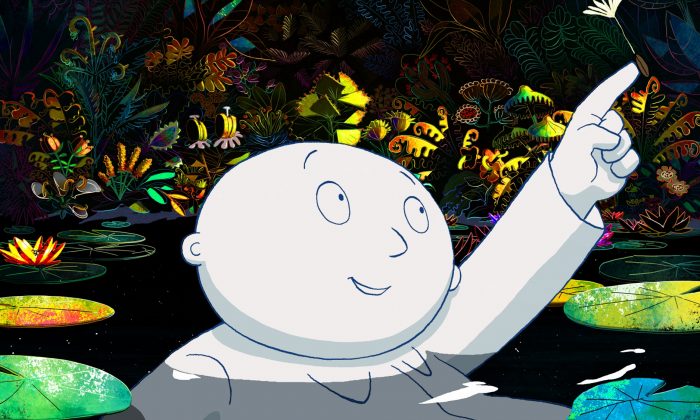 An animated fable that shines
By Joe Bendel

This has to be the most endearing dystopia you will ever see. One can understand why the Man in the Moon came down for a visit, but he will need a little help getting home in Stephan Schesch’s animated feature, “Moon Man.”

The President (presumably for life) has finally conquered the last little island on Earth free of his control. Yet, it hardly seems to matter to one little girl and her father. They are following their regular routine—a drive-in movie, followed by burgers from a 1950s-style drive-through. Then her father cruises home with the top down, while she curls up in the back seat with a blanket and the loyal family pooch.

Tonight, though, something is amiss. The Moon Man is not looking down at her, as he should be. Like other children around the world, she is usually reassured by the sight of him up there. (However, grownups somehow grow oblivious to him.)

Getting a bit bored, the Moon Man hitched a ride on a comet, but it was a one-way ticket. To get back, he seeks the help of Bunsen van der Dunkel, a Rip Van Winkle scientist who has slept through the President’s rise to glory. As it happens, the President also seeks the legendary inventor’s help in developing a rocket to facilitate his conquest of the moon. You get the idea.

First of all, “Moon Man” is basically right in line with what would be my approach to parenting, if only there were more drive-in movie theaters. Based on Tomi Ungerer’s children’s book, Schesch’s adaptation is unflaggingly sweet and gentle, but one can pick up on the author’s sly sensibilities. Indeed, the constant lampooning of the pompous President definitely follows in the tradition of Chaplin’s “The Great Dictator” and subsequent satires.

Happily, he has not really gotten down to oppressive business yet. This is a bright, vibrant world, filled with flowers and vintage convertibles. In fact, the hand-drawn animation is like a breath of fresh air compared to the computer-generated-focus-grouped tent-poles released by the studios. It looks great, and it perfectly suits the secondary theme of adults learning to see the world as kids again.

Frankly, the weakest link in “Moon Man” is the Moon Man. The innocent Ziggy-looking fellow does not have much personality, but the world around him compensates for him. There are some clever bits involving the President and van der Dunkel, and the soundtrack is inspired, including Louis Armstrong’s rendition of “Moon River.”

“Moon Man” has a healthy supply of idealism with the right subversive garnish. Schesch keeps the mood light and airy, even when the chips are down, maintaining a pleasant medium-up-tempo pace.

Good fun recommended for eyes and ears of all ages, “Moon Man” is now available on VOD from Tribeca Films.