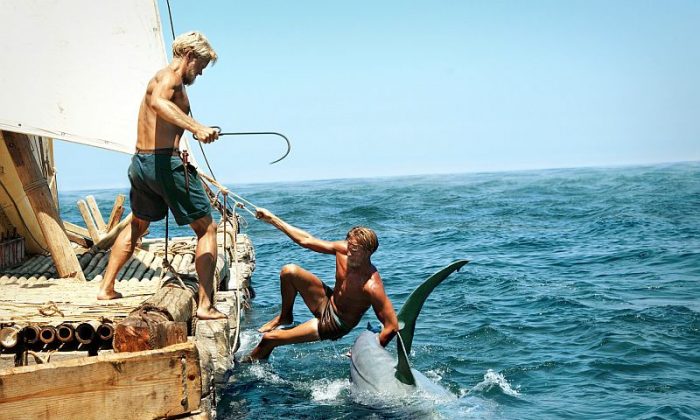 ‘Kon-Tiki’: From Peru to Polynesia, the hard way
By Joe Bendel

In 1947, memories of World War II were still fresh, especially in the once-occupied Norway. However, the reckless courage of a Norwegian explorer would inspire not just his homeland but also generations of adventurers around the world (reportedly including American test pilots and astronauts).

Thor Heyerdahl and his crew set sail from Peru to Polynesia without any modern technology in Joachim Ronning and Espen Sandberg’s “Kon-Tiki,” which opens this Friday in New York.

Although Heyerdahl is naturally restless, the time that he and his first wife Liv spend living in the Marquesas is quite happy. During this period, Heyerdahl becomes convinced that the South Pacific islanders’ original ancestors ventured east from Latin America rather than west from Asia.

Yet, the academic establishment dismisses his theory (sadly not excluding the fuddy-duddies at the Brooklyn Museum). Having absolute conviction in his research, Heyerdahl sets out to prove it by sailing over 4,000 nautical miles from Peru on a balsawood raft, using no modern instruments except a radio to inform the media of his progress.

Somehow, Heyerdahl recruits a crew of his countrymen for his dubious mission, including a dying-on-the-inside expat engineer and a conscience-plagued veteran of the resistance. They also have a parrot.

The plan is pretty simple: Launch the Kon-Tiki into the Pacific and hope the currents carry it to Polynesia. Of course, those waters are far from empty. Heyerdahl’s crew will contend with sharks, whales, and the greater dangers of stormy weather and dwindling supplies.

Filmed in both English and Norwegian versions, “Kon-Tiki” is old-fashioned in a good way. It celebrates rather than apologizes for the daring-do of Heyerdahl and his mates. These are not average men, but they are unquestionable mortals.

Watching Ronning and Sandberg (best known for the stirring war drama “Max Manus”) present their courage and camaraderie without hipster irony is quite refreshing.

“Kon-Tiki” also looks great, particularly the shark and whale sequences. The clarity of the underwater cinematography is quite striking as is the sense of scale. Frankly, this is the perfect film for viewers intrigued by the premise of “Life of Pi” but put off by its New Agey-ness.

It is well worth noting that “Kon-Tiki” was produced by Jeremy Thomas, whose name in the credits means something to discerning viewers. Thomas shepherded ambitious films like “The Last Emperor,” “Merry Christmas Mr. Lawrence,” and “13 Assassins” through development to art house screens. Similarly, “Kon-Tiki” is an international production that is large in scope.

Nonetheless, it is easily accessible, not merely because of the English dialogue (which the Norwegian actors handle relatively well). This is a classic seafaring adventure, vividly rendered by a talented cast and crew.