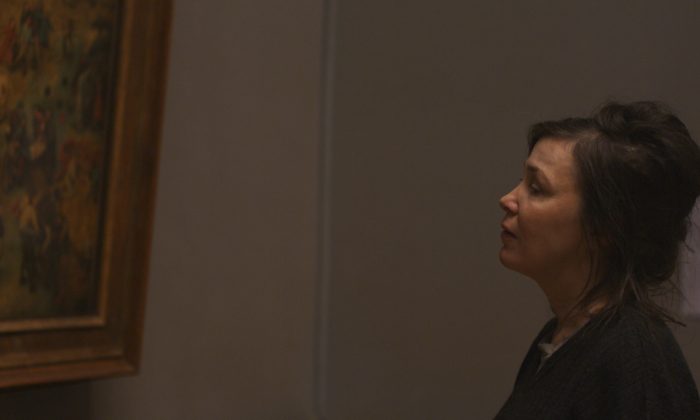 The Kunsthistorisches Art Museum in Vienna is one of those grand institutions where visitors can get happily lost for hours. Filmmaker Jem Cohen will play a game of hide and seek with his narrative there during the course of “Museum Hours.”

Anne is not a traveler by nature, but her estranged cousin picks an opportune time to fall into a coma. Leaving the mess of her life in Canada, she flies off to Austria, to do all the helpless waiting around that one does in such a situation.

Fortunately, Johann, a late-middle-aged museum guard, takes her under his wing. He acts as her translator and arranges a complimentary membership for her, giving her a place to while away the hours of pleasant alienation.

Most “Seinfeld” episodes are about more than “Museum Hours,” but the docudrama-cinematic essay definitely has its moments nonetheless. Probably the best of which happens in the Bruegel room, where a visiting scholar gives a lecture that would serve as a nifty little companion piece to Lech Majewski’s “The Mill and the Cross.”

Johann is also an intriguing character with a wonderfully soothing voice for narration. Played by the nonprofessional actor Bobby Sommer, who shares a similarly colorful background, Johann is a former rock band manager and high school shop teacher, for whom the novelty of working among some of the world’s finest art has not yet worn off.

However, the drama is rather thin stuff, mostly involving Anne’s daily visits to her expiring cousin and the slow evolution of her ambiguous relationship with Johann. Do not think of this as the adult analog of E.L. Konigsburg’s “From the Mixed-Up Files of Mrs. Basil E. Frankweiler,” because Cohen’s approach is ruminative and deliberately fragmentary.

He also includes plenty of his signature observational tracking shots of the surrounding streets, which are likely to sharply divide ‘Museum Hours’’ critics and partisans. In small doses, they nicely establish a real sense of place, but a little goes a long way.

Arguably, “Museum Hours” is a film whose whole is less than the sum of its parts. There are some fascinating individual scenes, but a tighter, shorter film would have better served the overall effect. Still, if you enjoy cerebral cinema, it is probably your best bet this week, whereas those requiring robust narratives are likely to be frustrated by its hybrid nature.