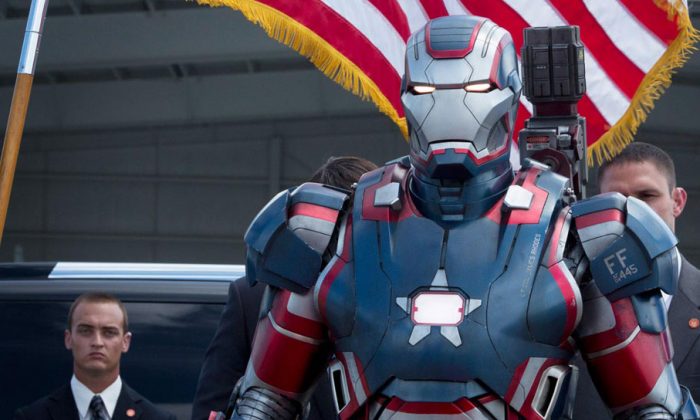 Colonel James “Rhodey” Rhodes as Iron Patriot (Don Cheadle) in the science-fiction action-adventure “Iron Man 3,” is the Liaison between the U.S. Air Force and Stark Industries. (Courtesy of Marvel)
Entertainment

Why do we like these comic-book movies so much? Superheroes—what’s up with them? Grown men in tights! Is it not immensely juvenile?

It is. It makes big bank at the box office, though. Logically, that makes us all a little juvenile. Isn’t that sad?

Nevertheless, it’s very captivating stuff! Why? Well, maybe because modern science says human beings actually can develop supernormal abilities. Levitating (flying) is a real possibility. We got an inkling of how that could happen in “Crouching Tiger, Hidden Dragon.” It triggers a deep satisfaction. And so we like to see Iron Man fly about.

However, the third installment of the “Iron Man” franchise, while breezy and fun, doesn’t really deliver on the fun of flying like the first “Iron Man” did, nor much of anything else, really.

But so what? Your kid’s going to see it, and you know you’ll probably see it too. We can’t help ourselves with movies about supernormal abilities.

Antagonist No. 1, Aldrich Killian (Guy Pearce), enters his life. He’s a Stark nemesis, just as mad, just as much a genius, just as shallow, but with no morality. He’s got a more-powerful biological challenge to the Iron Man suit. He inhibits the generation of Iron Man’s good deeds! He’s gotta go.

Might antagonists 1 and 2 be connected? Whatever! They clearly both have to go. Who you gonna call? Who’s the Iron Man for the job? Iron Man! (And there was much rejoicing.)

The character of Tony Stark is such that, while brilliant, he’s slightly unglued and is always, therefore, literally flying by the seat of his pants. So it’s particularly annoying when, instead of responding to taunts with superheroic restraint, he wildly flings down a huge “I dare ya!” gauntlet (and home address), which results in an airstrike on his supercool house with the super-genius, gizmo-laden Iron Man hatching station.

The problem with the superhero movies in isolation (as opposed to when they all bro-down in an “Avengers” movie) is that each of these guys has one supernormal ability apiece. Hulk smashes, Thor hammers, Spidey’s got webbing.

So it becomes a game of how many permutations and combinations of cool stuff writers can cook up for the one supernormal ability. One soon scrapes the bottom of the barrel.

Then, one has to escalate the awesomeness factor, and soon the believability factor is completely kaflooey—already barely believable premises expand into “Looney Tunes” territory.

But as mentioned, we have this nagging feeling that we could fly, and that would be so cool. So, so what if they don’t get the cockamamie pseudoscience right? Let’s go watch it anyway!