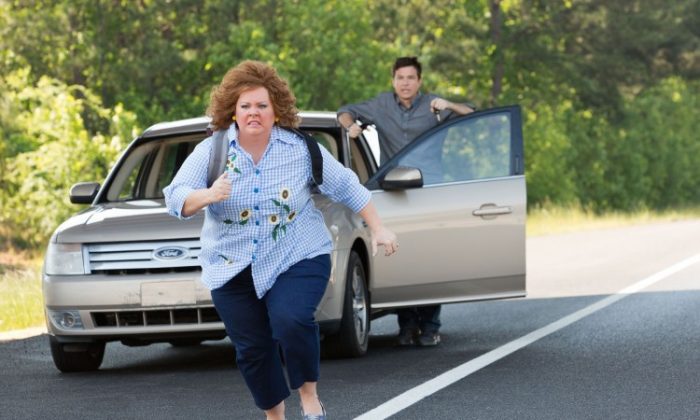 Jason Bateman and Amanda Peet in “Identity Thief,” a comedy in which a man becomes crazed to settle a bad credit score after someone steals his identity. (Bob Mahoney/Universal Studios)
Entertainment

“For every action, there is an equal and opposite reaction.”

The generation of credit card ease is inhibited by pain of possible identity theft. It’s a law of the universe. And there you have your highfalutin explanation of an exceptionally odious movie experience.

Sandy Bigelow Patterson (Jason Bateman) is an everyman living in Colorado. Diana (Melissa McCarthy) is a Floridian phone-phishing scam artist who steals Sandy’s unisex name, and credit cards, and then starts swinging from the chandeliers in bars and running up astronomical tabs for all her newfound inebriated “friends.”

She jams up his life, he goes to the cops, the cops shrug their shoulders—he flies to Florida.

He manages to track her down, but she’s a salty con lady whereas he’s a gullible milquetoast, so she punches him in the throat and escapes. He finds her again and cuffs her. (Before he left, his wife said of the cuffs, “Do you even know how to use those?”). She promptly removes the cuffs with a bobby pin.

Now, it turns out, Diana also conned a jailhouse con’s henchman—a henchman and a henchwoman, actually. Threatened with death, they also come a-calling. And there’s a skiptracer, played appropriately by the same guy who played the t2 terminator in “Terminator 2,” which was sort of a molten-metal robotic skiptracer (casting at its finest).

They escape the hench-people. Diana goes along with Sandy (as he’s the least of three evils), and it becomes a silly road movie slash odd-couple buddy movie a la “Midnight Run.”

However Bateman’s no Robert De Niro and McCarthy’s no Charles Grodin, which is not really fair, because … well, when in doubt—blame the script and the director. Let’s do that right now.

The t2 terminator, I mean skiptracer, finally manages to snatch Diana; but Sandy, in a rare moment of macho, manages to run Termy’s, I mean Skippy’s, van off the road with his rental car. Sandy and Diana then hike through the woods.

While Sandy is sleeping, a big snake crawls up his trousers, which causes him to scream and then ditch his pants with alacrity. So now they’ve got no wallet or ID.

They’re kind of buddies now, but still, he doesn’t want to turn into her and do something shiftless for money. When they finally run out of gas, she goads him to steal his horrible boss’s identity (Jon Favreau) by conning his way into the records department of his company’s local branch to filch his horrible boss’s info. Was it mentioned that this is the same director who directed the movie “Horrible Bosses?”

Now Diana and Sandy really bond. They’re palsy-walsy now. They have a heart-to-heart. She’s all upset; she doesn’t know her real name. She was raised in foster care. The movie takes a sharp turn into maudlin über-sap.

He finally gets her to Colorado. Anything more would simply spoil the movie, and we wouldn’t want that of course.

Character arcs: She sort of grows a conscience, and Sandy sort of has an excellent adventure that renders him less naïve and beige. Tempers and seasons him a bit, it does.

Up until he becomes somewhat manly, his supreme ineptness is less funny than nerve-wracking. He’s so inept that it makes one a bit aggravated. Angry, even—to the point where you almost want to slap your forehead with the heel of your palm and say, “You idiot!” Except it’s just not that exciting.

There’s much R-rated cursing for easy laughs. There’s more grossness than hilarity. Don’t get conned. Rent “Midnight Run” instead. Your stomach will be so sore from laughing at the antics of Grodin and De Niro that, the next day in the gym, you can skip your ab-crunch routine.