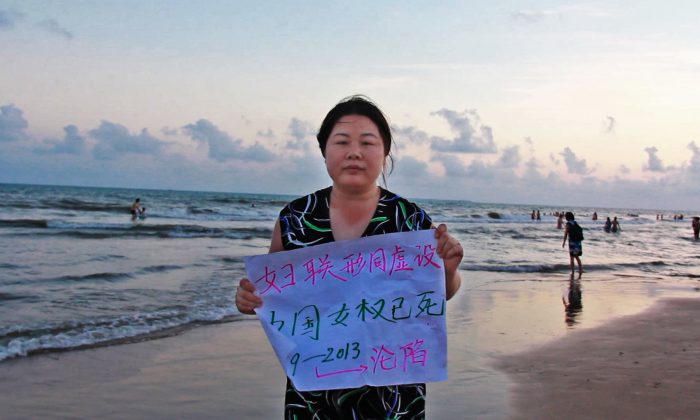 You might not know Ye Haiyan’s name, but if you attended the Ai Weiwei retrospective at the Brooklyn Museum, you might recognize all her worldly possessions.

When Ye and her young daughter were summarily evicted as part of the Chinese Communist regime’s relentless harassment campaign, a picture of their meager belongings dumped by the side of the road went viral. Being one of her social media followers, Teacher Ai recreated the photo in a dramatic installation.

The viciousness of the campaign against Ye is lower than you can possibly imagine.

However, Ye is not the only target of the Chinese Communist Party’s (CCP) orchestrated thuggery. Her lawyer and her documentarian were also followed, intimidated, and in one case arrested without charge. Nanfu Wang shows guts worthy of her subject throughout “Hooligan Sparrow,” which screened during the 2016 Sundance Film Festival.

Ye Haiyan (also known as Sparrow) first came to prominence as an advocate for sex worker rights. Always one to walk the walk, Ye went to work in the very brothels she protested, becoming an underground media sensation when she offered free sex for migrant workers.

In 2013, Ye, human rights attorney Wang Yu, and a group of equally outraged women protested a Hainan grade school principal who abducted, pimped out, and raped six of his appallingly young students. Although he and a local government official were caught dead to rights, the state declined to prosecute, claiming insufficient evidence. Ye and her fellow activists launched a public protest against the principal and his protectors, earning the full wrath of the state.

What follows is even more intense and galling than viewers will expect, even if they binge watch Ai Weiwei documentaries every weekend. We watch as Ye is attacked by a gang of home-invading ruffians and then arrested for assault when she defends herself.

She and Wang are constantly followed and frequently accosted by mobs on the street. At one point, Ye is held incommunicado for days as Wang Yu vainly struggled to visit her client.

You might think you have heard a lot about the state of human rights in China, or more precisely the lack thereof, but the viciousness of the campaign against Ye is lower than you can possibly imagine.

Obviously, the political implications of Ye’s story are absolutely radioactive. However, this is a deeply personal film that viscerally captures the fear and moral outrage of its subjects. There are times Ye and Wang are afraid for their lives, with very good reason.

As if that were not enough, Wang also structures the film quite adroitly. Using footage of the original protest, she dramatically brings it all full circle.

This is independent filmmaking at its most courageous. By keeping faith with her subjects, she put herself at risk, which is beyond admirable. Frankly, the preening, self-congratulatory “Yes Men” should die of shame if they ever see “Hooligan Sparrow.”

Sadly, Ye Haiyan was not able to attend the Sundance premiere because the government confiscated her passport. Lawyer Wang was also missing from the post-screening Q&A because she has been in prison since last July.

Of all the everyday heroes in “Sparrow,” she might just be the most idealistic and dedicated, so her current state is deeply disturbing (#freewangyu). Unfortunately, this timely film keeps getting timelier.

This is the film at Sundance that most deserves film-lovers’ support. It is an extraordinary debut from Wang that would be an incredible white-knuckle thriller, if it were not so frighteningly real.