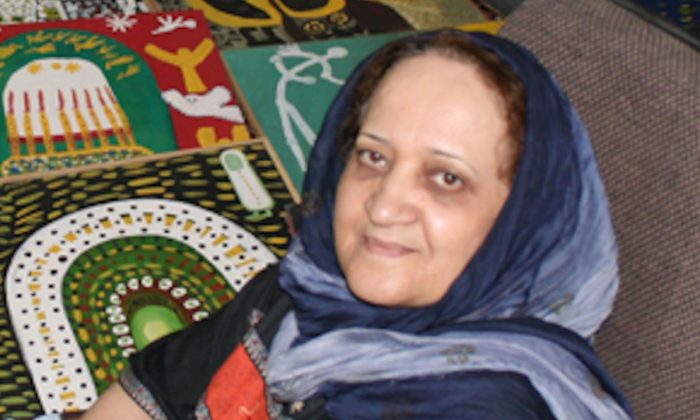 Akram, a 50-year-old Iranian woman who unexpectedly becomes a painter, next to a selection of art in the documentary “Going Up the Stairs: Portrait of an Unlikely Iranian Artist.” (Courtesy of Women Make Movies, www.wmm.com)
Entertainment

‘Going up the Stairs: Portrait of an Unlikely Iranian Artist’
By Joe Bendel

Language: In Farsi with English subtitles

Any women creating art in today’s Iran could be classified as an “Outsider Artist,” because you just cannot get anymore “outside” than a woman trying to express herself artistically in the Islamist state.

The devout Akram Sartakhti apparently has no interest in political subject matter, but she still must navigate the institutionalized misogyny. Rokhsareh Ghaem Maghami documents her work and complicated domestic life in “Going Up the Stairs: Portrait of an Unlikely Iranian Artist,” which screens during the 2013 Human Rights Watch Film Festival.

At the age of 9, Sartakhti was married off to Heider Rahimi, a colleague of her father’s, who was 17 years her senior. When the Shah was scheduled to visit her school, Sartkhti and her classmates were told to leave their headscarves at home. Instead, she dropped out before learning how to read.

For years, she lived in fear of her domineering husband, but as they advanced in age, her comparative youth somewhat turned the tables. Late in life, she turned the second floor of their townhouse into a studio.

However, Iranian law grants husbands ironclad control over their wives. Throughout “Stairs,” Sartakhti is worried that Rahimi will refuse her permission to travel to Paris, where her grown children have organized an exhibition of her work, as an arbitrary means of asserting his power.

Sartakhti’s paintings clearly fit within the Outsider rubric. While nowhere near as polished or sophisticated as Iran Darroudi’s surreal landscapes, her surprisingly large canvasses show an intriguing sense of composition and a striking use of color. They are worth seeing, but of course public exhibition will always be a tricky proposition for any woman artist under the current regime.

Serving as her own camera crew, Maghami obviously earned the trust of the artist and her husband. Still, one wonders what happens after she left. Frankly, there is often a pronounced disconnect between the on-screen calm captured on film and the bitter stories that Sartakhti tells of the early years of her arranged marriage.

Many people will take “Stairs” as proof that arranged spouses can always grow to love each other, but at what cost? Maghami’s documentary is rather ambiguous on this question.

Nevertheless, the 51-minute “Stairs” pretty clearly establishes the mandated gender inequalities of today’s Iran and how they severely hinder even a staunchly traditional woman like Sartakhti.

An interesting portrait of an artist marginalized simply because she is a woman, “Going Up the Stairs” is one of the stronger selections of this year’s Human Rights Watch Fest.