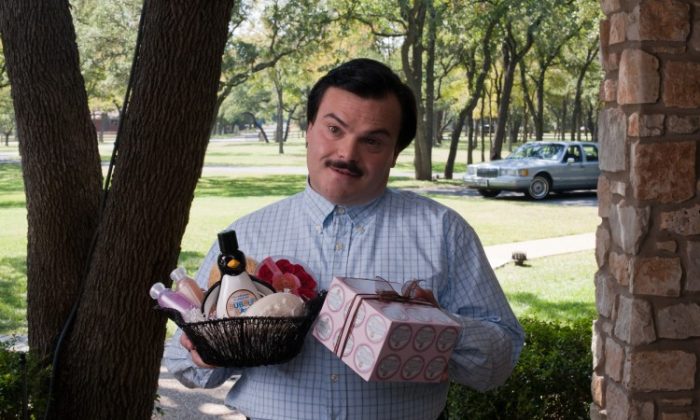 Jack Black in the comedy-drama “Bernie,” a film about a mortician who befriends a wealthy widow and creates the illusion she is alive after killing her. (Deana Newcomb)
Entertainment

Director Richard Linklater put the term “slacker” on the map with his 1991 film of the same name. “Dazed and Confused” was a brilliant cult classic paean to American public high school in the 1970s. “Before Sunrise” was a poignant romance of uncommon sensitivity and insight.

In what appears to be a possible first career dud, “Bernie,” billed as a dark comedy starring Jack Black, falls far short of Linklater’s normal standard.

Based on a true story, Black plays assistant funeral director Bernie Tiede in the sleepy town of Carthage, Texas, where Tiede was somewhat of a local hero. He was roundly respected and appreciated, and was considerate and polite beyond description. He dotted the i’s and crossed the t’s on all the things that the proverbial “Greek chorus,” commenting on small-town life in America, would consider excellent.

Bernie eventually befriends and begins running errands for a notoriously cantankerous elderly female by the name of Marjorie Nugent (Shirley MacLaine, hitting a home run with her eyes closed). She’s a local widow known for her money and her meanness. He becomes her constant companion, they often travel together, and he even manages her money.

Marjorie becomes fully dependent on Bernie and his generosity, and Bernie struggles to keep up with her bottomless pit of needs.

Bernie then up and whacks Nugent after being hen-pecked and nagged to distraction by her acerbic tongue. By “whack” we mean murder, of course. After mean Mrs. Nugent seemingly disappears from sight for many months, the local District Attorney (Matthew McConaughey) investigates.

Having grown up in Texas, Linklater lovingly portrays small-town Texas life. “Slacker” and “Dazed & Confused,” both set in Texas, also have the “Greek chorus” made up of local folks commenting on goings-on in small towns. Linklater includes interviews with a large cast of actual Carthage residents about their feelings of support for the actual Bernie Tiede.

Problem No. 1 is that this is quite often like watching grass grow. Add the singing of hymns in church, Bernie in an apron doing a cooking show, Bernie leading community theater in a rendition of “76 Trombones,” and staying awake becomes a problem.

Problem No. 2 is the fact that a dark comedy has been made of a real-life, tragic murder. This knowledge would seem to register on a subconscious level, leading to more of a tendency of the part of the audience to chuckle nervously rather than laugh.

Regardless of the above, it’s a great role for Jack Black as it allows him to stretch and show his considerable range as an actor. He thoroughly nails it, singing, dancing, and so on, but we already knew from “High Fidelity” that he’s got a great voice, and from everything else, that he’s funny. He just doesn’t have much funny material here.