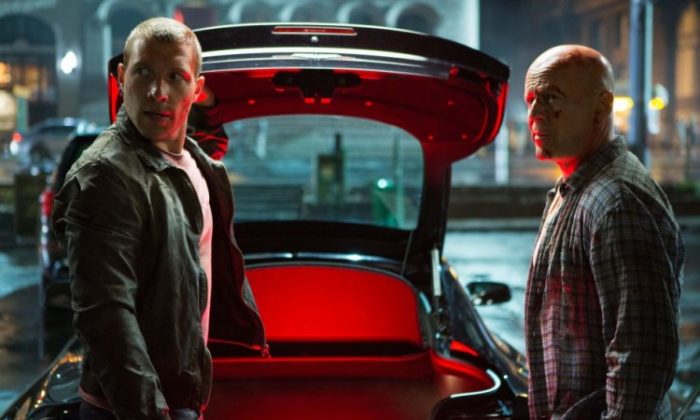 Bruce Willis. John McClane. “Die Hard.” At 25 years, the original is now considered an action classic. It changed the genre forever. In its wake, action films were getting pitched as “Die Hard” variants; the movie “Speed” was “Die Hard on a Bus,” “Air Force One” was “Die Hard on a Plane.”

Some aspects stayed the same. You didn’t mess with John McClane’s family members. Some aspects escalated; first he saved a building, then an airport, a city, and lastly the country.

Since in this version John arrives to save his son, clichés inevitably spring to mind: “The apple doesn’t fall far from the tree.” Actually John’s son Jack is very much a chip off the old block, but the current movie is nowhere near the history-maker the original was.

It should be titled “A Good Day for ‘Die Hard’ to Die,” but just as bad guys can’t get rid of McClane, bad scripts appear not to be able to get rid of the sequels, and since there’s now a possible passing of the torch, “Die Hard” may never die. It should though. It’s gone from the action sublime to the action ridiculous.

John McClane’s an endlessly resourceful, hard-bitten NYPD lifer-cop. He flies to Moscow to bail out his lost and now apparently mobbed-up son Jack. He finds out Jack (Jai Courtney) is in the CIA.

McClane takes five minutes to blow a three-year operation that exposes Jack and infuriates him to the point of pulling a gun on dad. McClane turns out to be such an annoying, bullying dad that as comedian Chris Rock might phrase it, “I’m not saying Jack should shoot him … but I’d understand.”

Jack and John now have to cooperate to keep Komarov safe, while trying to take down a Russian terrorist plot involving the still-toxic Chernobyl area and includes weapons-grade uranium and such.

Like all “Die Hard” movies, there’s tons of action and macho and fighting and cursing and shooting and blowing up stuff. And Reaper drones. Every action movie has to have a drone these days. Drones are hot.

The problem with action movies for some time now is that they’ve become total cartoons. Violence is an addiction, and it finally had no place left to go but to escalate into the ridiculous. Just like Wile E. Coyote falls 5,000 feet off a cliff, goes “poof” on the canyon floor yet continues to chase the Road Runner, so do McClane and son fall all the way down the construction site trash chute from the 30th floor, all the while being pummeled with fifty-caliber helicopter door-gunner fire, only to walk away unscathed.

Action movie chase scenes used to come at the end of the movie. Now they start after the opening credits. We always like it when cars go airborne off ramps, corkscrew 15 times, and the driver just walks away. The latest thing is launching trucks through highway overpass barricades, swan diving down to the highway, and continuing on one’s merry way without the engine block being ejected through the hood. Ya! Skol! That’s tremendous! But maybe one shouldn’t complain so much. The last “Die Hard” had McClane riding rodeo atop a spinning Harrier Jump jet.

It’s all about the escalation, isn’t it? Last time around McClane saved the country. In this, the fifth “Die Hard,” the McClanes save the world. In the sixth in the parade of sequels should Bruce Willis no longer be with us, look for John’s son Jack to be saving the cosmos.