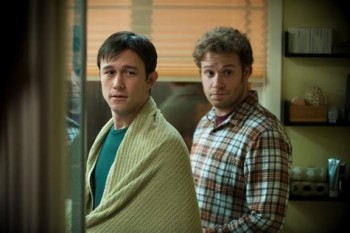 By Mark Jackson
FONT BFONT SText size
Print
Cancer will shake your life up. It’s guaranteed. What would YOU do, if you found out you had a 50/50 chance to live after getting cancer? If one’s life is all bogged down in a repetitious rut, getting cancer can actually sometimes be a good thing.

That sounds like the setup for a serious drama, but “50/50” is largely a comedy! As such, it’s not immediately clear why it receives an R rating. Oh, wait a minute—it’s because of Seth Rogen’s potty-mouth. Other than that, it’s a sweet movie. True story too.

Adam Lerner (Joseph Gordon-Levitt), a young man in the prime of life, contracts a rare form of spinal cancer and has a 50/50 chance of surviving. His buddy Kyle (Seth Rogen) uses Adam’s illness (he calls it “back cancer”) to hit on women. Adam is disgusted with Kyle, until his girlfriend Rachael (Bryce Dallas Howard) cheats on him, that is.

Adam goes for treatment and gets to know the boys in the chemotherapy waiting room. He goes for counseling, where his erstwhile annoying, by-the-book, inexperienced therapist Katherine (Anna Kendrick) begins to grow on him …

Finally, here is a movie where Joseph Gordon-Levitt doesn’t have to act like a crazy person. So far, Hollywood’s got him playing two notes: sensitive young man and ultraviolent juvie. For now, he’s got both ends of the spectrum covered. It’ll be interesting to see him start to fill in the middle. But he’s a true leading man, for sure.

Seth Rogen is always a pleasure to laugh with and at. He still hasn’t worn out his welcome and is in fine form here.

Bryce Dallas Howard’s eyes are so icy-blue pretty that they may be getting her cast as false and heartless these days. (She’s downright scary in “The Help.”) Howard is Opie’s kid (Ron Howard), however, so she’s genetically predisposed to having a warm heart. It’ll be good to see her finally play that portion of her range. She does icy-false a bit too well. It’s disturbing.

Anna Kendrick, a fresh young person already sporting an Academy Award nomination for her work with George Clooney in “Up in the Air,” is looking to join Amy Adams in the “so-adorable-I-can’t-take-it-anymore” department. Not a classic beauty, but she’s got something very special. She pretty much steals the movie. You miss her when she’s not there.

To sum up: Boy leads fairly easy, somewhat vacuous life with vacuous girlfriend. He gets cancer, looks death in the face, gets a new perspective, and becomes a man. Becoming an adult always involves surviving some kind of ordeal, something that’s perceived as impossible. For women, it used to be giving birth without epidurals or anesthetized C-sections. Ordeals like the Vision Quest or the Walkabout, by causing us to endure a complete lack of everything for an extended period of time, make us appreciate life that much more fully afterward. That’s what Adam Lerner learns. In terms of learning to appreciate one’s life—getting cancer can be a good thing.