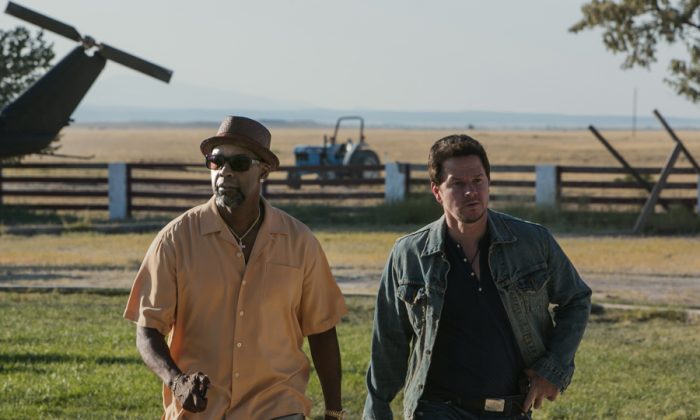 Denzel Washington (L) and Mark Wahlberg (R) in the action-comedy “2 Guns.” The film tracks two operatives from competing bureaus forced to be on the run together, yet both don’t know the other is an undercover federal agent. (Patti Perret/Universal Studios)
Entertainment

Just when you thought nobody could make a decent action-thriller buddy-cop movie (not counting “The Heat”), along comes “2 Guns.” They rarely make ’em this good anymore. Dare we say “instant buddy-cop classic”? We dare.

Except that they’re not really cops. Motor-mouthed gunslinger Marcus Stigman (Mark Wahlberg) and smooth-talking Robert Trench aka “Bobby Beans” (Denzel Washington) have worked together on a covert op for a year now.

They’re both in deep cover, infiltrating Papi Greco’s (Edward James Olmos) Mexican drug cartel. So far neither one has figured out that his partner is also an undercover federal agent, but from a competing bureau. Naval intel vs. DEA, respectively.

They go to heist 3 million of Papi’s cash from the Tres Cruces Savings & Loan, but discover their take is 40 million more than expected. Turns out, that extra 40 mil belongs to yet another federal agency. That sneakiest and most dangerous of federal agencies. Uh-oh.

Naturally, both their organizations drop them quicker than a bag of rattlesnakes. However, like so many of these stories (especially the Jason Bourne movies), the agencies forget it’s dangerous to have lethal, trained operatives “off the reservation,” with double motivations of fighting for their lives, as well as vengeance.

Their agencies hunt them. The big spy agency tracks them down via Earl (Bill Paxton), one nasty Russian-roulette-playing human bloodhound. The cartel wants them dead too.

In fact when the cartel does eventually catch them, it suspends them, inverted, while intending to mete out death via a mean, marauding bull. Talk about motivation to do sit-ups.

As their covers are blown and they have little left to lose, you know what happens next. That’s right—Marcus and Bobby team up.

And of course, this being a manly-man’s movie, he must have a muscle car. What has he? Looks like a matte black ’72 Barracuda with a lovely Hemi engine rumble. One’s inner caveman of course covets this car.

Denzel Washington’s not usually this funny either, although we always sense that he’s highly capable of it. His performance here is slightly reminiscent of his character Alonzo Harris from “Training Day,” especially in the scenes with the striking Paula Patton as his DEA handler.

Washington mostly plays straight man to Wahlberg’s more extroverted character, but the fun these two have playing off each other is infectious. Of particular note is the contest of wills between Washington’s Bobby Trench and Bill Paxton’s ruthless, coercive Earl. The tension is revved up high, but the humor also never subsides.

Along with the muscle car growl, the sound engineering on “2 Guns” is almost musical. Gunshot and car crash sound effects have percussive and rhythmic qualities. There are satisfying truck chase-scenes and realistic explosions. It’s obviously violent but nothing’s gratuitous. The actor chemistry, as well as the overall pacing, timing, and tension, is always topnotch.

Imagine the classic buddy teams from “Lethal Weapon,” “Butch Cassidy and the Sundance Kid,” and “Midnight Run” as billiard balls. Baltasar Kormákur’s directing is the cue ball, hitting those three and smacking “2 Guns” straight in the corner pocket. Instant classic.