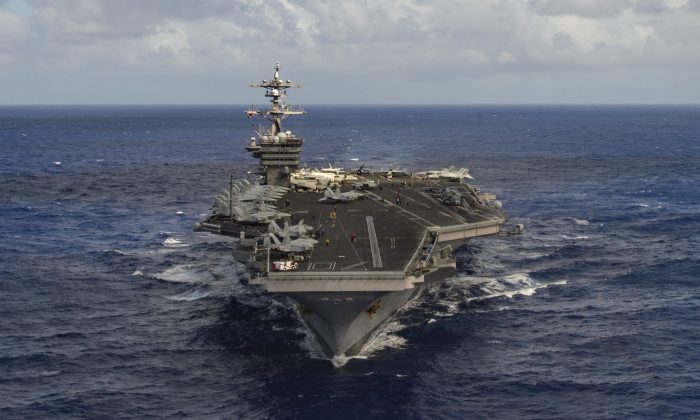 Movement of US Navy Strike Group a Reaction to North Korea: McMaster

WASHINGTON—The decision to move a U.S. Navy strike group toward the Korean peninsula is a “prudent” reaction to a pattern of provocative behavior from North Korea, White House national security adviser H.R. McMaster said on Sunday.

“It’s prudent to do it, isn’t it?” McMaster said, when asked why the Navy strike group Carl Vinson, whose flagship is a nuclear-powered aircraft carrier of the same name, will make its way toward the Korean peninsula from Singapore as a show of force.

US Navy Strike Group to Move Toward Korean Peninsula: US Official

Reuters was the first to report the deployment on Saturday.

“This is a rogue regime that is now a nuclear-capable regime, and President Xi and President Trump agreed that that is unacceptable, that what must happen is the denuclearization of the Korean Peninsula,” McMaster said.

North Korean officials, including leader Kim Jong Un, have repeatedly indicated an intercontinental ballistic missile test or something similar could be coming, possibly as soon as April 15, the 105th birthday of North Korea’s founding president and celebrated annually as “the Day of the Sun.”