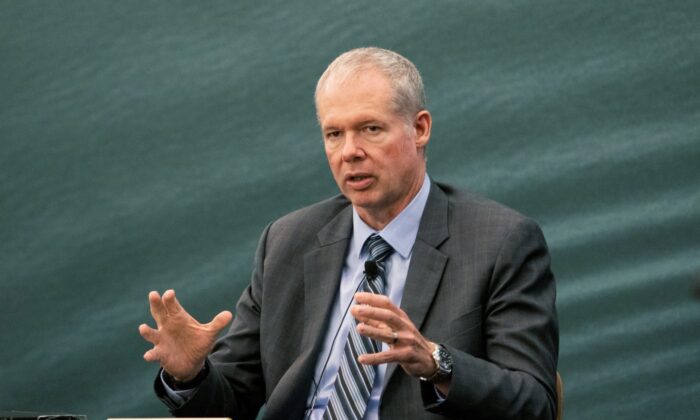 RCMP Chief Supt. Chris Leather is questioned by lawyer Rachel Young at the Mass Casualty Commission inquiry into the mass murders in rural Nova Scotia on April 18/19, 2020, in Halifax on July 27, 2022. (The Canadian Press/Kelly Clark)
Canada

A senior Mountie testified Thursday he believes political inference was behind RCMP Commissioner Brenda Lucki’s determination to have police release details on the guns used in the Nova Scotia mass shooting.

Chief Supt. Chris Leather made the comment at the public inquiry into the rampage that took 22 lives on April 18-19, 2020, during cross-examination by Tom MacDonald, a lawyer who represents two family members of victims.

MacDonald asked if Leather believed, after the officer participated in a teleconference with Lucki shortly after the shootings, that the commissioner’s comments reflected political interference in the criminal probe underway at the time.

Leather responded, “That’s my impression,” and he said he came to that conclusion after gathering the facts about the “lead-up” to the meeting with Lucki.

RCMP Chief Supt. Darren Campbell has alleged that during a meeting on April 28, 2020, Lucki said she promised the Prime Minister’s Office that the information on the guns would be released in connection with the Liberal government’s “pending gun control legislation.”

The government was in the midst of drafting fresh gun control measures to reduce access to semi-automatic weapons in the days following the mass shooting. Campbell and Leather both testified this week that releasing the information on the guns would have interfered with the ongoing investigation into who provided the killer with the semi-automatic weapons.

Leather, who is the head of criminal operations in Nova Scotia, testified on Wednesday that he had received a call on the evening of April 22—three days after the mass shooting—from Lucki and that she had asked him to send her details about the guns. The superintendent has said that a list of guns he had sent to Lucki was for internal purposes only.

Leather’s statement about the April 22 call with Lucki, and about a series of emails that followed, didn’t come up in a July 6 interview he gave to inquiry lawyers.

During cross-examination Thursday by Michael Scott—a lawyer who represents the majority of the victims’ families—Leather said he hadn’t discussed the call or the emails on July 6 because lawyers with the federal Department of Justice had suggested he take “a reactive posture.”

“The advice I received was not to proactively disclose the conversation (with Lucki) and the emails leading up to the meeting on April 28, (2020),” Leather testified.

“I knew from my notes and emails I had prepared and submitted that it was obviously relevant to what would become the infamous phone call (meeting) of April 28 … and was troubled by that and wanted their advice and was advised to take a reactive posture.”

Lori Ward, a lawyer for the federal Justice Department and the RCMP, told commissioners Thursday she believed there had been a “misunderstanding” from Leather about that advice. She said she and another federal lawyer had understood that Leather had a document relevant to the April 28, 2020, meeting with Lucki that they needed to review because it might contain privileged information.

Lucki has denied interfering in the police investigation. She testified Monday before a House of Commons committee that she didn’t recall telling then-public safety minister Bill Blair that she had “promised” to have the details on the guns released. She said she remembered using different words with Blair.

Leather also faced questions from lawyers representing victims’ families about his force’s poor relationship with other police forces before the mass shooting, and in the two years since then.

Truro police Chief Dave MacNeil testified in May that on the night of the mass shooting, the information coming from RCMP had been “very sporadic” and that Truro police “didn’t really have a tasking.”

Leather said it wasn’t feasible to have close collaboration with the Truro police during a lengthy and complex emergency, because the two forces hadn’t trained together for mass shooting scenarios.

However, lawyer Josh Bryson asked Leather why the RCMP didn’t at least call on municipal police forces to assist in canvassing the community of Portapique, N.S., on April 19, 2020, to see if there were more victims. It took the RCMP close to 18 hours from the start of the mass shooting to locate five of the victims’ bodies.

The officer agreed with Jane Lenehan, a lawyer who represents the family of victim Gina Goulet, that during his tenure, relations with municipal police forces had deteriorated, and that it was essential to the safety of Nova Scotians that this be remedied.

Leather said he was hopeful a major change in management of Nova Scotia RCMP would help decrease tensions.

He said he is being transferred to national headquarters in August to take on a new role, while the assistant commissioner at the time, Lee Bergerman, has retired, and Chief Supt. Darren Campbell was recently transferred to New Brunswick.