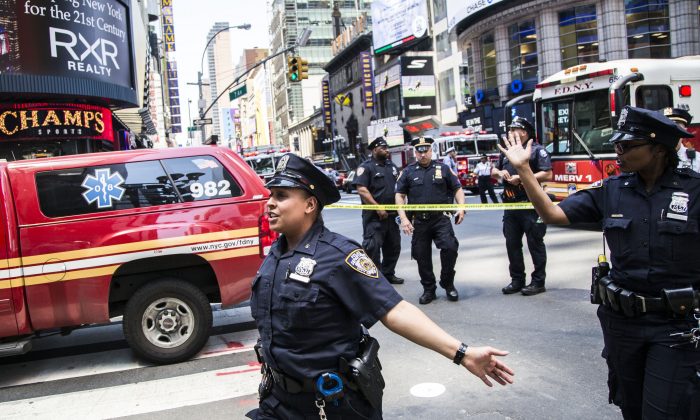 NYPD officers gesture to the crowd to step back after a vehicle struck pedestrians on the sidewalk in Times Square, New York, on May 18, 2017. (Samira Bouaou/The Epoch Times)
New York

Motorist Who Mowed Down Times Square Pedestrians Due in Court

NEW YORK—The U.S. Navy recruit who drove his car along a crowded Times Square sidewalk, killing a young woman and injuring many others, is due to appear in court in Manhattan on Friday to face charges of murder, attempted murder and vehicular homicide.

Richard Rojas, 26, knocked pedestrians into the air as he sped for three blocks in his burgundy Honda sedan through one of the city’s busiest areas on Thursday before crashing into a metal stanchion, the New York Police Department said.

Rojas, who is from the Bronx area of New York City, had been arrested twice for drunken driving, in 2008 and 2015, and once this month on a charge of menacing for threatening another man with a knife, police said.

Police said Rojas was evidently intoxicated on Thursday. He was initially taken to a nearby hospital after he was detained.

“We know he had something in his system, but we haven’t had the toxicology back yet,” said police department spokesman Adam Navarro

City officials do not consider the incident an act of terrorism, Mayor Bill de Blasio said during a visit to the scene on Thursday.

Police said the young woman killed on the sidewalk was Alyssa Elsman, 18, who was on vacation with her family from Michigan. Twenty-two people were injured.

Rojas was due to appear in Manhattan’s criminal court on Friday to be arraigned on one count of second-degree murder, five counts of aggravated vehicular homicide and 20 counts of attempted murder.

Although only one person was killed, a driver can face multiple counts of vehicular homicide under New York law if other people are seriously injured. It was unclear if Rojas has a lawyer.

Navy records show Rojas enlisted in September 2011 and was based in Illinois and Florida, working as an electrician’s mate fireman apprentice.

He was arrested a year later at a naval base in Jacksonville, Florida, where officials said he attacked a cab driver, shouted “my life is over,” and threatened to kill police, according to court records. Rojas was charged at the time with misdemeanor battery and resisting an officer without violence, but it was unclear how the case was resolved.

Navy records show he spent two months in a military prison in Charleston, South Carolina, in the summer of 2013, but did not say why. He left the Navy in May 2014.